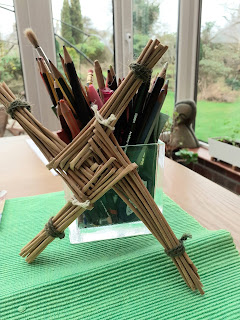 Happy St Brigid's Day! I wrote about St Brigid last year, just after I had made my first ever St Brigid's cross. Here it is a year on, the green of its sap all dried up, but still a promise of Spring! February has come round again, arriving in winter, and February will roll away again, but by then we'll have our lungs full of much less wintry air. Hopefully, at least, so let's not get our lungs filled up with anything else.

I noticed in last year's post that I had reread La Peste last January. I remember pulling Camus of the shelves and his feeling interesting and topical, but still a year ago there was no real sense of what was to come to all of us. At that stage we were watching the news from China and even Italy, but pandemic implications still seemed a distant thing. 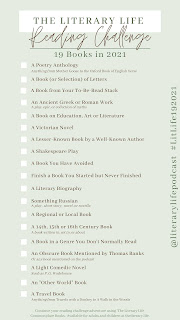 MK has an interesting reading project this year. I'm always following everyone else's reading recommendations, so I thought this might help me think of what to read next. Having said that only two out of the three books I managed to read in January can be made to fit a category. I was a bit disappointed that I only read three books in the month, which did feel like a very long month! But I notice from last year's post that I only finished three in January 2020 as well, though maybe we shouldn't ever after use 2020 as much of a yardstick... 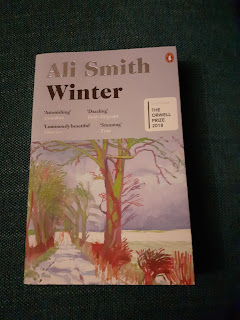 I reread Ali Smith's Winter in the New Year. She has been publishing a book a year for four years now, following the seasons, and using one of David Hockney's Yorkshire paintings for each cover. I saw this exhibition of his ages ago at the Guggenheim Bilbao, would you believe. All the way to Spain for a day to see an English's painter's Yorkshire series! Hockney looks at exactly the same scene at different times of the year, reflecting on the influence of the seasons on our daily lives. What a wonderful metaphor for the year we've been in.

Smith is doing much the same thing, ambitiously. Assessing Britain after Brexit in four seasons, in four sets of stories, all of which intertwine with other stories, worded in layers of scintillating, metaphysical word-play that Smith conjures with such a light touch for such erudition. I love her work. I definitely don't understand it all, but she must be the only author I can read and savour without even worrying about what the tranche of landscape hovering over Art's head at the Christmas dinner table means.

And trees. She writes a lot about trees, and I do love her trees. Hockney's too. 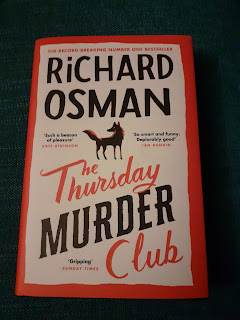 Mattman and I both got Richard Osman's new book for Christmas. He had mentioned it shortly before online Christmas shopping crossed its threshold and I silently wrote it on the list in my head. But Prince Charming apparently overheard our conversation and silently wrote it on the list in his head! I've passed my copy on to a maternity leave colleague who had twins last August. She's now at home with three boys under the age of three. It's the perfect book for her - clever and funny, but not at all hard to read. Much less concentration, and time, needed for this one than with Ali Smith!

Osman does something very brilliant with the detective genre, I think. I hardly ever read detective books, though I do fall into glorious binges of Dorothy L. Sayers every now and then. So I'm claiming this for "A book in a genre you don't normally read", even though Osman's intrigue feels very fresh and new. It reads like comedy most of the time, maybe because it's narrated partly by one of the characters through her diary. And you are piecing together the characters as you go, then, working out who you trust or suspect or like or don't. And what a cast of characters! Mostly residents in the most atypical pensioners' community you could imagine. I'm quite sure we have nothing like it here in Northern Ireland! It's a brilliant book really. I think it would satisfy the most meticulous detective reader, while still being very engaging indeed just on a human level for someone like me. There's a wonderful wonderful wonderful relationship between the main retired characters and the two police folk. That's all I'm saying. Read it! 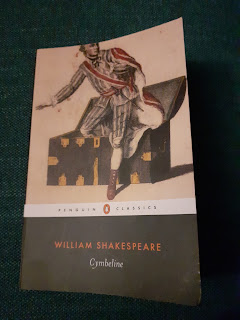 And then because it is quoted in Smith's Winter and because of "A Shakespeare play" I ordered Cymbeline. I'm used to watching or rereading Shakespearean plays with which I am very familiar indeed. This is the first time in more than decades that I've come completely fresh to a new story. And what an amazing story to read! I think this may be my new all time favourite Shakespeare. I couldn't actually work out if it was tragedy or comedy. It has the heroes with the tragic flaws, and is absolutely dark enough to be tragedy. It has the separated children and the disguised noblefolk and the forests of the comedies. And, one of my favourite parts, it has a literal deus ex machina. I'm not going to tell you the end so I can't say more on category, but this was a genuinely edge of my seat, well edge of my bed, experience. I loved it.

(And on an edge of your seat note - we are currently watching the utterly gripping Designated Survivor on Netflix. Kiefer Sutherland looking the same age as us. We're about to finish series 1 - no spoilers, please!)

So, fine far friends, here we all still are. We've survived January and nearly a year of These Strange Times. I send you much love and many prayers from the frozen north! And here are some more of Hockney's glorious trees: The Arrival of Spring in Woldgate, East Yorkshire, in 2011 x 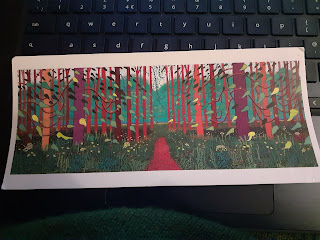 Hmmm.... well, maybe I will try Cymbeline! I am trying to play with that list, too, and I was sort of stumped over the Shakespeare category. Thanks for the prompt! <3

Sounds like some fine reading! I haven't read many detective novels in many years. I'm still hunting for the Shakespeare play I'll read. I think I'd like to do one I've never read before (of which there are several). Keep surviving, my friend. Since you're a teacher, perhaps you'll get your covid vaccine sooner? I hope so.

I love Hockney's trees! I recall as a young girl (maybe 8?) lying on my back under some huge pecan trees, looking at the stars in the night skies through the branches which were swaying in the breeze and listening to the roar of the wind. (Southeast Texas, circa 1964. Don't know why the fire ants didn't get me.) I recall thinking how much I loved trees and thinking I might be the only one in the world who really appreciated them quite so much. Now, I find that MOST people feel that way about trees! ;) You piqued my curiosity with the Osman book. I guess I'm the right age to be intrigued by the possibilities of a murder mystery taking place within a pensioner's community, lol. It will go on my Amazon wish list! God bless your year! (God bless us, every one!)