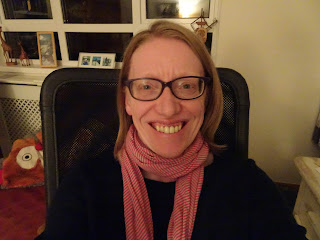 I really did not think that my first post of the new year would be about politics. Yuck. I apologise in advance. So, to soften the blow, here is me, looking unusually less than loathsome and somehow quite skinny. That's my currently favourite navy, wool dress. So far, so not entirely yuck. 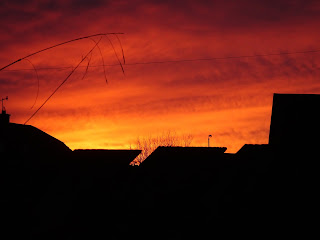 And this is a beautiful, incredible sky sometime over the holidays. Breath-taking evening, that was, with no trace of yuck. Not a filter used at all- not least because that would be well beyond my ken, like Northern Ireland politics. 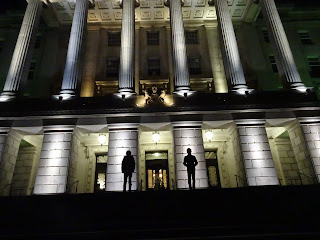 And here is photographic proof that the figures of wisdom and creativity have been seen at Stormont. They may be only thirteen and twelve years old, but there's more potential in those boys on their way in to our Parliament building  than I would vouch for in the whole "Assembly" of what we call politicians who made their ineffective way out of it this week.

I think I only talk about politics when I hear us mentioned on Radio 4, feeling I must apologise for my nation. A wonderful English journalist was talking yesterday about how he had lived here for three years and loved the place, but felt that everything he wrote about us needed to be prefaced by a brief introduction to the whole gammut of Northern Irish history before he could try to explain any current issue. We may not have become a people of inept political choice if all our own news bulletins were prefaced in much the same way.

So, good luck, America, for tomorrow and beyond- here is my situation, for anyone still reading:

My devolved government is not going to govern anymore as the republican second minister has resigned and his party is not nominating a replacement because, under our peace terms, this forces a new election for the whole Assembly.

He has resigned in protest, reflecting the whole little country's feeling, republican or not, of disgust that the First Minister's loyalist party has covered up money made by many, family members included, through loopholes in a previously exciting renewable energy heating scheme. The First minister refused to resign, see above.

There was also annoyance that the loyalist minister in charge of cultural things had withdrawn funding from an Irish language school but given lots and lots and lots to flute etc bands, which may sound innocent to you, but try walking through Belfast on 12th July, and then we'll talk.

All my democratically elected representatives, mostly polarised green and orange because of the way my country insists on voting, then went home, on full pay of £70,000 per annum. They are currently in nice hotels up and across my little country re-nominating themselves to stand in March's election, and posting self-congratulatory photos on farcebook.

Before they left to go home and get changed for their nice hotel dinners, they neglected to put a budget in place for the next financial year, thereby stalling all negotiations with our GPs, many of whom are now dating their resignation letters from the NHS and preparing to go private.

Welcome to the Frozen North. Yuck.