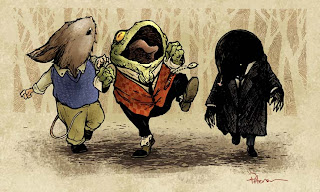 The Willows have been having more fun on a train since Toad escaped from prison in washer woman garb.  They are half way through their Australian adventures, and will be moving on soon to The Provincial Homemaker where apparently beds are ready and hatches are battened!

What fascinates me, well, one of the things that fascinates me about this Grand Tour of the Whole World, is watching not just the change in the seasons but the skip in the sequence as they run backwards on the big ball of the seasons. They travelled the States all last Autumn and Wnter and arrived in Ireland in the Spring.  This flowed into Summer through England and France, but now as the Western Hemisphere balances on a line between Autumn and Winter, the boys are happily breathing in warm Spring air again, and will no doubt bask in a hot summer before they jump out of an envelope in Colorado to find themselves in deep midwinter!  Have their long johns at the ready, PP!

Do visit Liz's blog and leave them a message- gorgeous, sunny photos full of picnicking fun! Thank you, Liz and hubby x
at October 26, 2012 2 comments:

Email ThisBlogThis!Share to TwitterShare to FacebookShare to Pinterest
Labels: Wind in the Willows 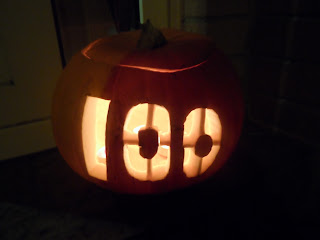 Dear Prince Charming,
I am very glad that you are home. I know it was only for one night, and that you were technically still in the country, but that little old Irish Sea makes such a difference somehow.  Thank you for carving my pumpkin before you left. Everyone at Book Club was very impressed with its welcome at the door. And I was very impressed that you got not only the number but also the window from the title.  Also quite impressed that Ulster won. Must be the icing on the rugby trip away cake.﻿ 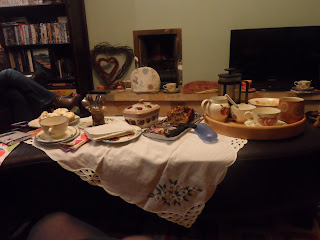 It was good that we had Book Club, I think. It kept us all busy. You would have been very proud of your boys, who opened the door for arriving folk, and helped serve food, and amused themselves manfully, and went to bed eventually with not (very) much protest.  It was a great night at Book Club.  Not everyone had hated the book, always a worry when you've chosen it!  It maybe wasn't everyone's cup of tea/coffee/hot water/sugar free lemon and lime stuff, but it did remind me of all those innocent abroad journey books I read at university, and there's such licence to mock all, and indeed all the century, therein.  We hadn't all thought it was a hilarious satire also on the Larsson genre of horrific violence in Nordic countries, but we had all loved the bit where the elephant sat down. 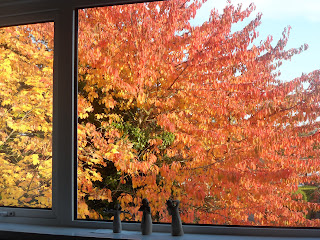 Anyway, you're back in the Land where all is golden and good, and that makes everything all right. There's such a hole in the whole when one is missing.  It makes me wonder at my beautifully justified jaunts away.  Not that getting away from it all is bad. Just that with you is better than not. I am very glad that you are home x﻿
at October 21, 2012 6 comments: 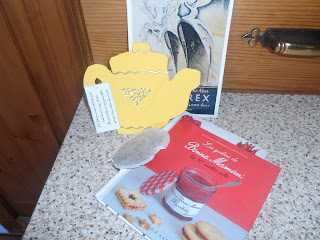 Blogging is a wonderful thing.  It forges ties across continents that would never otherwise have been so much as a mere concept.  Offering words that are lives that are inspirations and encouragements and lessons, that is already a good and wondrous gift. But when bloggistes are prepared to send tangible evidence that we are connected, that is a humbling experience.  (Not least because I am the worst person in the world at posting promised things.  You poor folk know who you are...) So, thank you, Floss, for my red package, which arrived last week and brought us great excitement! And thank you, Ang, for my teabag! The tag reads, "I'd like to come and see you and have a cup of tea, but as this is not possble, please have this one on me!"  Have some cheesecake, ladies; have a slice of love as a small token of great esteem! 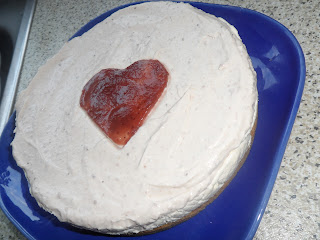 We spent this evening playing Monopoly and eating chocolate cake, with left over strawberry puree from the cheesecake.  This is about as close to wealthy strawberry property deals as we will be getting!  Wishing you all a week filled with good dealings and a nice taste in your mouth! 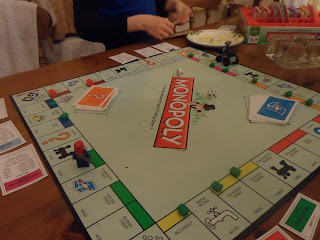 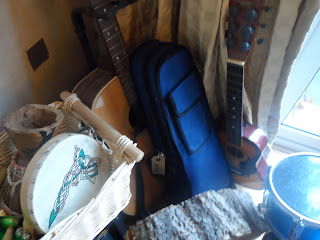 There has been a need to rejig thinking and spaces in this land this week.  Our latest instrument of musical destruction production arrived today.  And great excitement it brought! 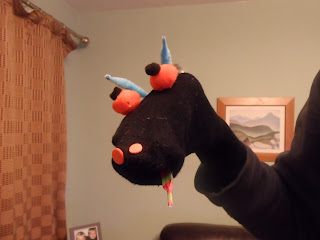 Last night I was on my way out to the second and third of my three current jobs, having spent all morning at the first.  So Prince Charming was left with the sock, the sewing kit, the pom poms, the scraps of everything, and the P6 homework. 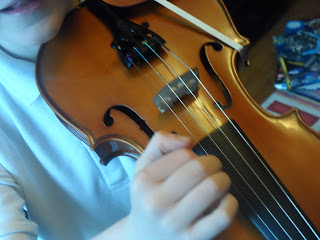 Young dogs, and strawberries, seem to be significantly less inhibited when throwing themselves utterly into new tricks! 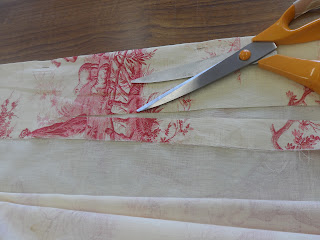 I spent most of yesterday at a course on making Romans blind; sorry, Roman Blinds. Contrary to Bob Almond's belief, I did not stick men from antiquity in the eye with sewing machine needles for six hours. Though my back might not have been quite so sore if I had.﻿
﻿ 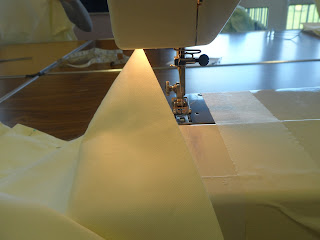 Four of us were expertly sequenced through the measuring, ironing, folding, ironing, pinning. ironing, pleating, ironing and even sewing stages of getting the lining onto the fabric.  It's Mise's fabric, by the way, finally in use!  And gorgeous stuff it is to work with too.  I have some slip-stitching to finish at home, and then I shall go back to learn how my wood and metal work should advance.  Thankfully I'll not have to carry my sewing machine up four flights of stairs that night! 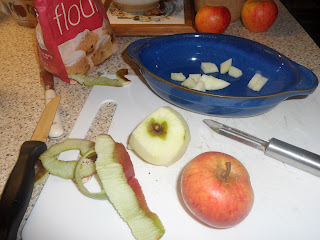 Today I realised that making crumble alongside a now very able eight year old is not the same thing at all as standing in merry control beside his younger self.  Here are the bits I was allowed to do- fruit preparation!  The three unpeeled apples are this year's sum harvest from our little tree. The peeled one is more exciting. It was foraged from a secret house that we found down a secret lane just round the corner from us. We did have permission to be there!  Jo's Secret Crumble is very good! 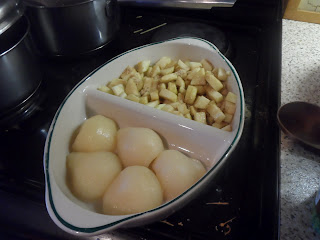 Email ThisBlogThis!Share to TwitterShare to FacebookShare to Pinterest
Labels: Scenes from a kitchen, sewing 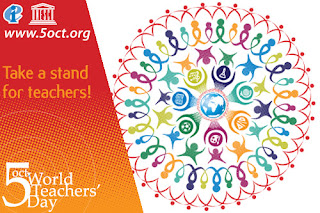 Thank you, Ang, for my e-card!  We were discussing in the staffroom today that we would all like to have quiet and easy classes all day in honour of Teachers' Day. I was also thinking how nice it was to be in a school today, standing in front of classes who were, mostly, co-operative and, generally, fun!

The life of a substitute teacher is a strange and varied thing. But I'm finding that when you only go to one small school it gets better and better, as you learn names and become part of the furniture. I even got the job of ordering the pizzas at lunchtime- one small step for you, one huge stride for Magskind!

8W and I were together five times in all today. The last session was Science, and to help the teacher I took them back down to the History/English room where I was based. "Are we doing something scientific?" they asked. "Mais, oui," I replied. Well, not actually in French.

I put the word 'scientific' on the board and in groups we had a competition to see how many words we could make with the letters therein.  I thought it would last ten minutes- these are eleven year old kids who "failed" the Transfer Procedure of which I have begun to speak.  Twenty-five minutes later we were still sharing ideas and counting like mad.  Two groups got the same number of words, so we put 'tie-breaker' on the board for them and away they went again, with other groups flooding around them to help.

It was hilarious!  We got 33 words out of 'scientific' altogether.  Admittedly it won't get anyone a GCSE or look great on a Personal Statement, and it certainly wasn't quiet, but on World Teachers' Day I had a ball!
at October 05, 2012 4 comments:

Email ThisBlogThis!Share to TwitterShare to FacebookShare to Pinterest
Labels: Transference of Emotion, work 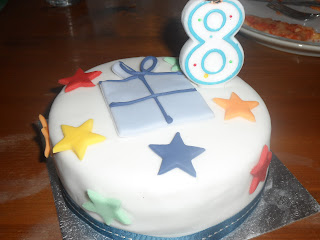 Eight big thanks for eight big years of Jo.  We've reached the end of three days of celebrating, and yes, there were three cakes. I made (not this) one!  Praising hard tonight for the child who sings incessantly and sucks the marrow from life.  Deeply thankful that he survived that night of asthma attack, and that he has feeling right to the tips of every finger that the plastic surgeon was confident would move but not feel.  At his baptism service we asked for the first chapter of Joshua, but have been constantly amazed that at every turn this boy really has been strong and very courageous.

We went to the Zoo today and counted everything in eights.  PC managed 8 elephants' ears.  Mine included 8 still blooming rhododendron heads, 8 feathers and 8 hungry pelicans.  Jo counted 8 penguins swimming, 8 planks of wood, 8 cow spots and some others. I have to say that Mattman counted everything and anything from 8 shoes on us to 8 sitatunga (antelopes?) and 8 hairs on the biggest pig I have ever seen in my life.

It's good to know that our years, however many, are safe in the hands of the one who knows exactly how many hairs there are on all our heads.