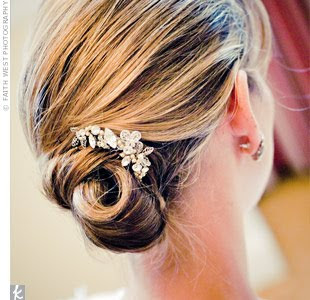 Me: I'd like to come next Saturday to have my hair put up in a chignon.

Eight year old hairdressers: We don't know what that is.

Eight year old hairdressers: Is that a French roll?

Eight year old hairdressers: We could do you a nice, trendy bun? Something more up to date?

Email ThisBlogThis!Share to TwitterShare to FacebookShare to Pinterest
Labels: alphabe-Thursday

A Pause in Lent

I think I've just made it! Cooking Catherine- click on the picture and it will take you to Floss' blog where all the Lenten Ladies are listed on the left. Cannot recommend a better hour's reading! 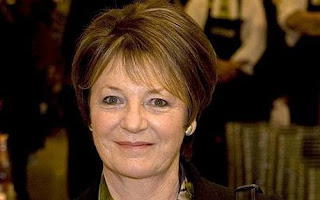 I'm back this week to my annual Lent reader- Delia's A Feast for Lent. I usually start well and tail off miserably towards the end, but I'm determined this year that, having started miserably, I might make it to the end!

Her theme for Week 3 is Listening: not hardening your heart, but letting the deep call to deep. I was muchly delighted to read this yesterday. I feel that most of my prayer revolves around the present crisis, at home or outside the strawberry bed. Last year my Lent journal recorded a frankly amazing voyage from my original key words of anger and anxiety to the promise of joy and peace.

I knew this year that I had nothing but thanks to offer in the desert. (And one major prayer that will be shared when the time is soon right!) I had thought that I would love to hear God speak, just to hear Him speak. Not with any agenda of my own. And the title for today's reading: God speaks! Ha ha!

Today's final meditation: My soul is waiting for the Lord/ I count on his word...

X will not be marking their spot 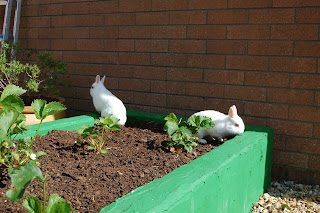 I am sorry that I have not been much around your lovely blog this week. PC has had a Frantic Fortnight with Very Important Canadians, and hatches have been battened on the home front! I especially apologise for not pausing for Lent last weekend, which I very much missed. Plans are laid for a Restful Weekend...

And on top of it all the rabbits are no more. Jack Rabbit had a painful few days that culminated in a stay chez the Vet, whence he came not home. Peter Rabbit, I like to feel, was too lonely alone and the suns found him on Tuesday, quite still in his hutch.

No X in the garden. Not even for Alphabe-Thursday. I took the wimpish way out, I'm afraid, and the Vet has all undertaken. Don't feel any pressure to suggest suitable replacements, as there will be no need!
at March 24, 2011 16 comments:

Email ThisBlogThis!Share to TwitterShare to FacebookShare to Pinterest
Labels: alphabe-Thursday 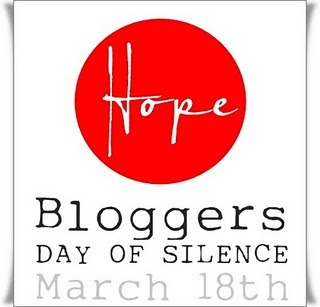 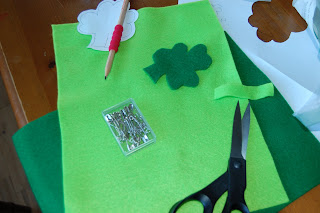 Jenny's Alphabe-Thursday post for today, W, links to one of the alphabetting bloggistes who is in Japan. 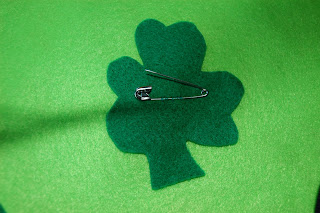 It feels frivolous to be pre-posting this as the news resounds with still more fear and terrifying possibilities. 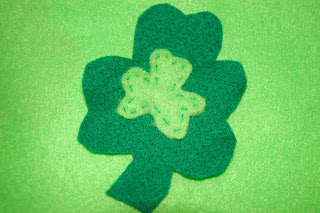 But then, who else could we focus on here today of all days? Especially with this as starting point. 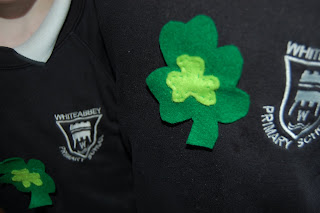 And most especially with the words of his Breastplate resounding back.
at March 17, 2011 9 comments:

Email ThisBlogThis!Share to TwitterShare to FacebookShare to Pinterest
Labels: alphabe-Thursday, Philosophy, St Patrick, Things I Have Actually Made

Facetiously this week I'm grateful to blogging for a chance to procrastinate on the challenge of leading the weekly prayer meeting tomorrow morning. But really I'm extremely grateful to have lived most of my life on the shores of Belfast Lough, in a Northern clime that knows no extreme of temperature, nor of tempest. Where the hills surround and shelter. 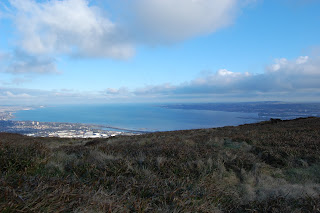 For most of this week I've been haunted by the image of the baptism that preceded Jesus' baptism- when at the moment of that baptism the very skies were torn asunder and yet the manifestation of all that creator power was a dove. God dealing gently and patiently with us. But I'm thinking the manifestation of created power this weekend continues to terrify in these times of the in-between. 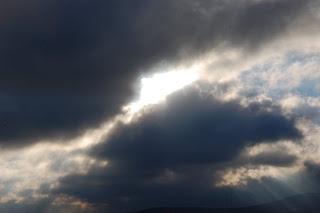 We had a show of great might in church this weekend- hundreds of people coming through the doors of our new and finally ready extension. Such gratitude to the Wonderful Warren who conjured bouncy castles, archery, magicians indeed, food, climbing wall, all manner of community event. The centre of it all is the Heartspace, with tables and chairs and sofas and love. PC played an acoustic set, an evening concert and the Sunday morning dedication service. Such talent in small places to big effect. 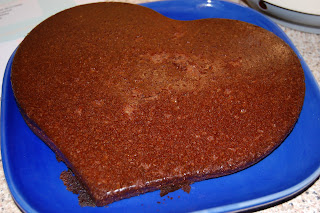 This week I also finished my latest Barbara Pym, who was slightly more upbeat ultimately. "The small things of life were often so much bigger than the great things, she decided, wondering how many writers and philosophers had said this before her, the trivial pleasures like cooking, one's home, little poems especially sad ones, solitary walks, funny things seen and overheard." 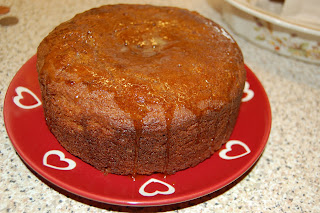 Mind you. I couldn't live without those great things either.
at March 14, 2011 9 comments:

According to the Sage Fred, Celtic Christianity knows thin places. It feels to me like fissure lines where the closeness of Heaven touches, actually touches, the stones and the ground and the skies breathing into the places where souls have chanted glory for long. My favourites are Jerpoint Abbey, Co. Kilkenny and especially Devenish Island, Co. Fermanagh. Today I'm thinking of Lent as one of my favourite thin times. 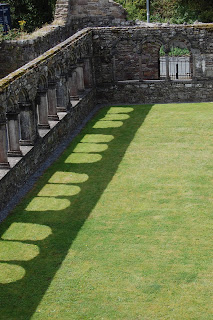 In the Library just now we're starting to go through the annual Appraisal Process. Jokingly late one night we flicked through a Professional Develoment book from the Business School trolley. When I paraphrase this quote I still start to cry so hilarious was it at the time- you'll have to remember that it was late! The advice therein was that in work you should let your light shine because by doing so you subconsciously give others the right to let theirs shine too. (Mags stops typing to wipe her eyes...) 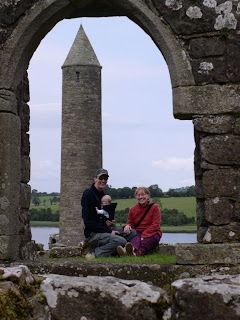 But today our special preacher finished his thoughts with much the same idea. That we should walk our faith every step. Live our faith every step. Because only then would we give others the right to step out into theirs too. So I'm going into this Lenten week with the thought that as I walk with Christ towards Passion, I might walk openly and hopefully encouragingly. In the thin place, at a thin time!
at March 13, 2011 11 comments: 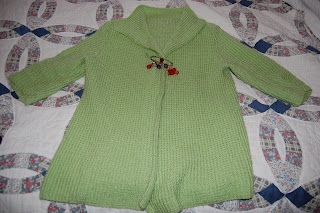 My mother knit this for me for Christmas, and its warmth has rarely been cast off since! But the colour is really starting to shine now that Spring has been coming! The actual colour is very like the lovely yarn shown at the Quiet Home today. In it I confess to feeling like this: 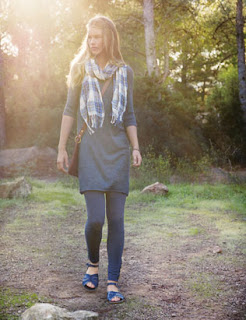 And would you believe that as I type PC has just floated in on a cloud of finally having found a new tech coat, and it is also in vernal green! 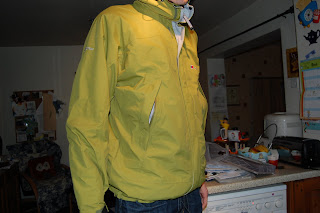 So that's my Alphabe-Thursday-on-Friday-again for the very difficult letter V! What I really wanted to post about was this, but it would hardly have been the most original dream!
at March 11, 2011 9 comments:

Pancakes in (and around) Belfast today... 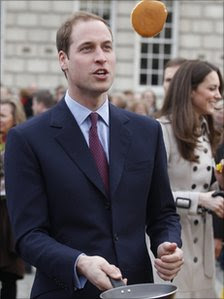 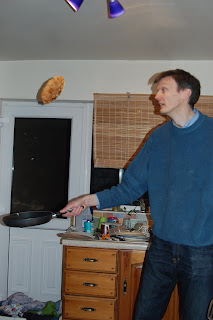 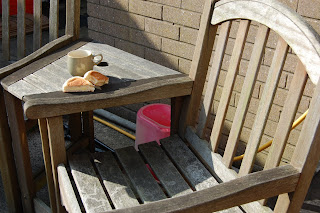 It's all decidedly weather beaten in the garden this Spring, after so much snow and ice, I imagine. But the sun shone hot and bright all day here and toasted me as I sat with tea and muffins in between bouts of housework. 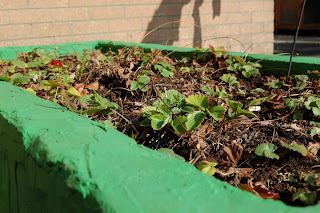 I even managed to rouse myself to pull out lots of dead leaves and stalks from the strawberry bed, our own little allegory of life! Apparently, according to a gardening column about three weeks ago, I should have had potash in down already. Hmm. But new shoots here and even in the rhubarb bed encourage me to look forward to Lent with great expectation. To pray with great expectation. 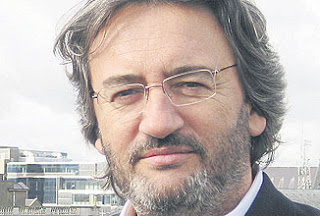 Fergal Keane. I think The Story of Ireland is only running on BBC Northern Ireland, following its earlier debut on RTE 1, so maybe you haven't been entranced by the melodic voice and balanced thoughts of this truly impressive piece of accessible journalism. Mattman sits up to watch it with me on Sunday evenings. So we sit huddled together on the green sofa and discuss in swift nuggets the unfolding events.
We try to talk to the suns about anything and everything in as much detail as we think they can process, but we have been fairly silent on the elephant in the society that is ours. So praise be indeed for last night's episode on the C18th. Recounted firmly from a perspective of Revolution, and featuring large and gorgeously the role of the Presbyterians in the United Irishmen, what a joy to be able to explore your history through this, instead of wading through the bigoted side-taking that we had to find a way through as we worked out what questions we could ask, when and of whom.
These are undoubtedly sunnier times in the frozen North and I am glad to be talking to my children now, and not then.
ps I told PC to pick a number between 1 and 9, so he picked 3. And Pom Pom's was the third comment last Monday, so Pom Pom: You Are Special!

Prince Charming has a wonderful t-shirt with Tolkien's fabulous words- not all who wander are lost- thereon. Seems a good way to start into Lent with Floss and the crew! And actually our Methodist Man has been doing the kinesthetic Walk through the Bible in slots recently and we've been pointing out many points of the Big Wander on the way though the desert books!

Anyway, I seem to be starting Lent at the end rather than the beginning. Having started the weekend with thoughts of angels, these fused into thinking about the role of the angels in the desert. Matthew 4:11 and Mark 1:13.

The immediate context is thinking of friends who have had rotten illness times this week involving clinical dehydration and hospitals. Of PC pushing through discouraging times. Of looking back over two years of fraises lachrymosae and realising that life could maybe be more now than an absence of crisis management. (She whispers this last bit for fear of being proved wrong!)

So as I set out to wander through the desert with One braver and better and stronger than me, I am thinking of the angels who "attended Him". And I'm liking that thought! It makes me wonder if maybe this year I won't be giving up for Lent, but taking in.
at March 06, 2011 7 comments: 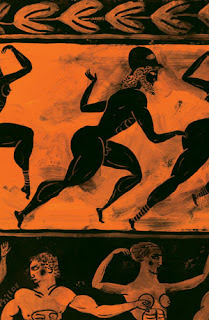 Click on the image for her column today. Challenge is always good. If I can encounter it from the safe distance of reading!
at March 05, 2011 1 comment:

Since it was the impossible letter U for alphabe-Thursday this week (I know. Late again.), and since I missed last week's T with all its lovely, easy, delightful tea connotations, I decided to share my all time favourite song ever which I thought was this. 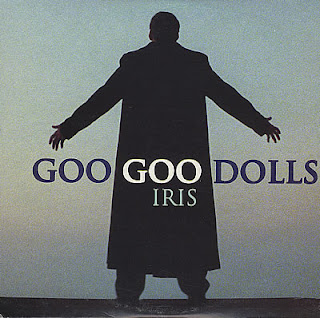 I once used it in a talk for yoof where I linked the song to the person of Mary Magdalene. I'm sure the two seemed as Unconnected to them then as it does to you now. I only vaguely remember what the talk was supposed to be about.

Unfortunately Giant's Ring doesn't begin with U either, but I hereby promise to get back to all you budding and qualified archaelogists as soon as possible. Hmm, a nice solo visit to the museum next week, methinks...

(And it's no coincidence that both songs come from the City of Angels soundtrack!)
at March 03, 2011 5 comments: