Edinburgh, and thanks for Pam, Sandra and Catherine

For some frustrating and completely baffling reason, I can no longer leave comments on some blogs. So, Pam and Kezzie, apologies that I never seem to visit. In fact, I do, but I leave no trace. Which my father would deem most uncharacteristic, having spent all of his parenthood wondering why one so small could make so much noise going up and down the stairs. Fifty-one years later and I do still make lots of noise going up and down the stairs. 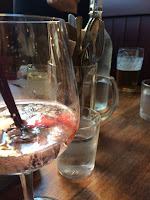 Anyway, if I had been able to comment on Pam's blog I would have waxed lyrical about her hospitality; and about Holyrood Palace; and about the time we four strawberries went to Edinburgh and drove to South Queensferry looking for somewhere to eat and got lost and ended up passing that huge shopping centre that hides the Royal Yacht Britannia and then gave up and ate lasagne back at the hotel, which was situated at the height of irony and right next to the Forth River Bridge... 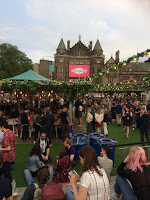 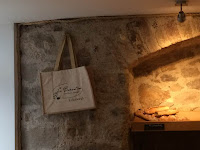 I would also have said that next summer I'm hoping to get to the Edinburgh Book Festival, since this summer I managed to do a bucket list thing and spent a wonderful day at the Edinburgh Fringe. I had gone to Glasgow to spend the weekend with Catherine, ostensibly to climb Goat Fell. At another height of irony I'd sent half an hour driving right past it on the coach from Cairnryan, but when I arrived and C suggested that the Edinburgh Festival was on, there was no choice really. I was beyond excited. This was the week before the Book Festival, Pam, or our paths may have crossed again! 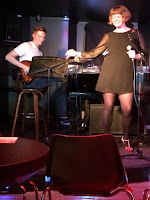 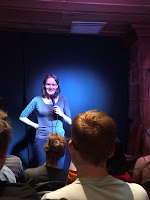 It has been quite a gift to have been in Edinburgh three times in the last year. Catherine's living in Glasgow has allowed me two trips crossing the Scottish inland by train for the day, and Sandra's amazing tour of the Highlands gave me a whole weekend in the capital as she arrived to start her odyssey. 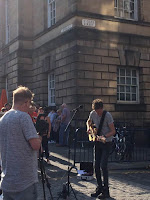 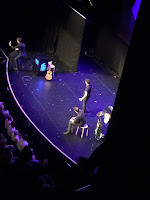 I still haven't ever been to the Botanics, Pam. That's on the bucket list now, with the Book Festival. I think that Catherine's experiences of the Yarn Festival may be as close as I vicariously get to that! But for anyone who didn't see the hilarious Foil, Arms and Hog at the Fringe, or who has not yet discovered them on farcebook, here, at yet another height of irony, is the genius Irish trio I got to see in Scotland!

Email ThisBlogThis!Share to TwitterShare to FacebookShare to Pinterest
Labels: Brexit, Glasgow and beyond

I think that knitting is hard. I have to think very hard, and count very carefully and take lots of time. What does God think about knitting?  I've been looking it up this week. Knitting is mentioned twelve times in the New International Version of the Bible which is the translation I mostly read. 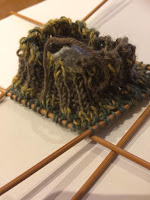 Nine of those references to knitting all come in the same chapter. It's chapter 13 of that weird and wonderful book of Leviticus. That catalogue of what to do in every circumstance of life when you're living as part of a nomadic, camping community of thousands of people in the desert a very long time ago.

This rule book for desert roaming has just dealt with the problem of containing leprosy and has now moved on to mildew. Knitted clothing is mentioned nine times, along with leather and woven materials. If the mildew is spreading the article is destroyed. If it washes out, great, wash it again; if cutting out the rotting piece stops the spread, great. The commentary I read on this passage talked about trying to protect the property of the community, but also about mitigating the cost to poorer members of the community. The needs of the people were considered.

But ultimately if this thing, made presumably mostly by women, is diseased, it should be destroyed in the interests of the greater good. So the conclusion I draw is that a knitted, inanimate object is disposable if it is going to rot anyway. That's all there is about literal knitting. 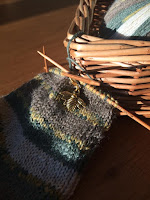 However, knitting is used as a metaphor for something else in three other places. Two of them are in the book that tells the story of a long-suffering, disease-ridden, family tragedy-afflicted man called Job. He's been arguing with God, and his friends, about the cruelties he faces without having done anything to merit them. At the end of the book God finally speaks back. It's worth the read. God describes a creature that apparently could be the hippo:


Look at the behemoth, which I made along with you and which feeds on grass like an ox. What strength he has in his loins, what power in the muscles of his belly! His tail sways like a cedar; the sinews of his thighs are close-knit... He ranks first among the works of God, yet his maker can approach him with his sword.


This time we've got a living, grown creature instead of an inanimate object. The knitting metaphor reinforces the author's desire to communicate great pride in the deliberate, careful creation of a marvellous animal. The implication of the wider passage is that, even though God could destroy the beast if He wanted, Job could do nothing against the might of a hippo. In the same way he can certainly do nothing about the moral decisions that the God of the big picture takes. The knitting is God's craft, not poor Job's. The design and its carrying out, all God's.

Job has ironically acknowledged this himself much earlier in his narrative, when he begins to plead with God about his condition:


Your hands shaped me and made me. Will you now turn and destroy me? Remember that you moulded me like clay. Will you turn me to dust again? Did you not pour me out and curdle me like cheese, clothe me with skin and flesh and knit me together with bones and sinews? You gave me life and showed me kindness, and in your providence watched over my spirit.

We have a  person being created in this extract. It is a reference to the womb. The knitting is again a metaphor for careful, deliberate creation and my commentary talks about the lavishing of painstaking care as the unborn Job is poured out, curdled, but put together by God. There's life, and kindness, and watching over. 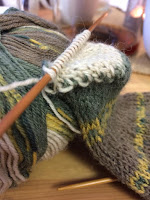 Finally, there's the same reference to what happens in the womb in Psalm 139:

For you created my inmost being; you knit me together in my mother's womb; I praise you because I am fearfully and wonderfully made; your works are wonderful, I know that full well.

There's the same wonder and the same implication that the unborn child is precious. Again in the wider context the question is what will God not do for the child he has put together with every intention of watching over.

Now I suppose this is where we divide. Because we know that life goes badly wrong. We know that God can be read as the cruel afflicter, like at the start (and indeed middle) of Job's story. We know too as feminists that a woman's body is precious and her own, and is not the political terrain of men. I'm going to state clearly my opinion that women must have recourse to legal abortion in certain carefully considered circumstances. I in no way advocate a return to back street abortions and the deaths they caused.

It's just that I believe too that, like knitting, babies are stitched together carefully by a God who also mourns this state of potential sickness in which we all live, who detests crimes committed against the women he carefully crafted, but who retains the right, as the God of the big picture, to be the one who gives life and takes it away.

Knitting is hard. My knitting is far from perfect. But I believe in knitting. Psalms again, "He will respond to the prayer of the destitute; he will not despise their plea. Let this be written for a future generation, that a people not yet created may praise the Lord." 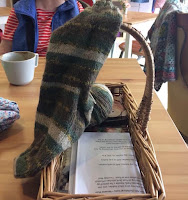 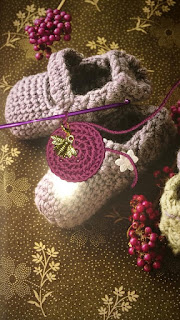 Goodness, is it already September? I didn't ever tell you more about my weekend of Edinburgh blue skies that turned out to be a most blessed time with the outrageously generous Sandra of Thistle Cove Farm. Of course you will have read all the detail over at her place ages ago!

Well, from the blue skies of May to the purple shoes of September. A friend is celebrating the arrival of her first grandchild and, despite the fact that I studiously avoid making baby presents due mainly to my utter ineptitude, I thought I would flick through all my books and rifle through my basket to see if I could "cobble" something together. I found a pattern for booties in Marie-Noelle Bayard's Crochet!, and had just about enough yarn left over from the only other baby present I ever once upon a time made.
﻿ 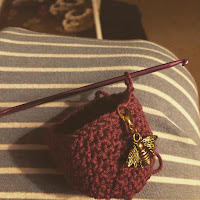 I have time for just such a whimsy as this as I am currently at home from work knitting myself together after a very little medical thingummy in August, which may also explain why I found myself back downstairs at 2am the other morning, wide awake and ready to "cobble" a tad. The little shoes, the midnight hour, the need to have not a wrong stitch, all reminded me of one of my favourite Ladybird books from my childhood.
﻿ 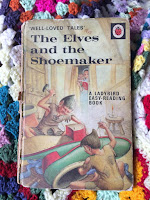 So there I sat feeling somewhere between the cobbling elves and the wife from the storybook. It made me smile that the picture that stands out most in my mind forty years and more since I read and re-read this book is the one of the woman sitting making a little thing. Obviously I had aspirational hopes of crafting greatness even in the bleak days of Northern Ireland in the 70s!
﻿
﻿
﻿

It's all still ineptitude and aspirations of greatness, or at least of not very many wrong stitches, but here are two little fairy shoes for Freya! I know that her grandma, who has neither great big ears nor teeth, will like them! I'm putting a copy of this very edition, re-released by Ladybird in with the shoes. Grandma will like that too! 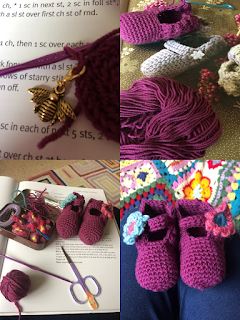 All of which really just makes me think of my high octane suns, the strawberries for whom I never made a single thing because I just wouldn't have had a notion sixteen years ago. Blogland has everyone looking so very marvellous, so very A*, all the time. My two boys are more raggedy elf than anything else, but they are becoming very wondrous young men, and here in the once upon a time of the Meadowplace it's all about them really, all the time. 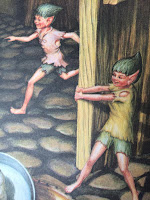