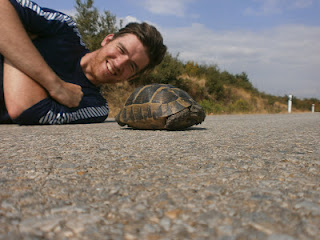 This is not my Jo! This fine (human) specimen is another mother's son, and I cannot begin to tell you what an amazing job she has done. Mostly because I don't know it, except in part.

I met Aaron, not having met the tortoise at all, when he was in a Youth Fellowship where I was helping to facilitate a Peace programme. This was shortly after the Frozen North got The Peace. Now he is cycling back home from Istanbul to Belfast. The tortoise whom he has met en route has inspired a short story for children and for all those who have ears to hear.

He's the sort of guy you'd love your own suns to meet and chat to some day, maybe when they're a bit older.  Old enough to catch the call. Two days away from being eight is still a bit young for intercontinental cycling, but not for the tortoise story!  I think you'd all love his blog.

Today we took thirteen boys to play pirate golf, and then discovered that there were in fact fourteen. One day down; two to go! 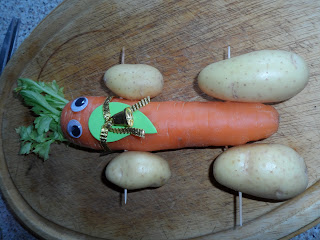 Here in the Frozen North we have secondary schools and grammar schools.  They are where you go after Primary School.  You spend all of P6 and the start of P7 being mercilessly drilled for The Transfer Test which happens in the early winter of P7. The results of this test decide whether you will go to a grammar school, usually highly regarded, or a secondary school, not usually highly regarded.  This simplistic and overly generalistic summary of our education system will no doubt be revised over the next fourteen months on fraise because..
Mattman is now in P6.
However, I would record heartfelt and joyous thanks for Mr Knight.  Mr Knight is Mattman's P6 teacher. Mr Knight believes that he will get more work out of happy children. Mr Knight has spent the whole month of September revising everything from the full-stop to times tables. Mr Knight has not "hit the ground running" with past papers.  Mr Knight's homework for tonight was to create a character out of fruit and vegetables.  Mattman presents Super Vegetable Delight.
Thank you, Mr Knight! 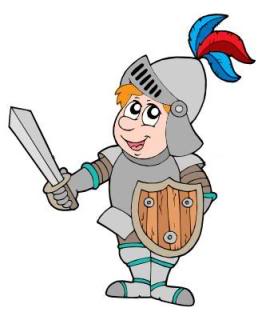 The Willows' Grand Tour of the Whole World 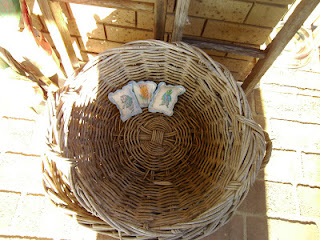 The Willows have arrived at their latest destination. A new home, a new land, a new continent indeed!  Can you guess where?  Go see- it's very, very far away from here!  You can tell from the sunshine...  Thank you, Liz; thank you so very much!

Email ThisBlogThis!Share to TwitterShare to FacebookShare to Pinterest
Labels: Blogs, Wind in the Willows

Rend have released their first video from this winter's Campfire stuff. No sign yet of beach strawberries- but excitement mounts in the Land nonetheless!

September is a bit manic here. And there's a little something missing. Just a hole in the picture, which is generally happy and cosy and relaxed and good. But right in the middle there's an empty spot. Will be spending the weekend trying to decide what might fit!
at September 20, 2012 6 comments: 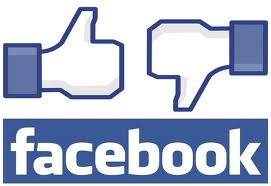 I like liking pages belonging to places I like and then being able to see in one place at one time what's on at the places I like to like. Hence we got to Land of the Giants, and hope not to miss something as special as Peace Camp at Downhill Demesne next time.

I like logging in late at night to see if Queen Niqi is about for a chat.

I love being logged in at the same time as Ali in Nepal, when we chat as if she too were just up the hill.

It's a great place to upload lots of pictures that everyone's asking for- Spring Balls, Great Escapes.

And on the rare occasion when PC is across the Atlantic, it's a wonderful way to leave messages and photos, and connect when time zones actually permit.

The mores vary as much as the people who use it.

When you're a private sort of a person you really shouldn't be there.

You get folk from all the different cultures and mindsets of your acquaintance throwing remarks about without any idea of the interpretation they'll provoke.

When you have a clever phone it's suddenly all fine and dandy to be so busy telling the world how much you're enjoying yourself at x, y, z that you forget you're currently with the tagged A, B, C at x, y, z who are either doing exactly the same thing or feeling sadly neglected.

I should be connecting with the real souls of this house way more than with what I heard kids in school yesterday refer to as bakebook. You'd need to know that bake in Northern Irish means face. I think!

Question A: Which two activities were inspired by presents brought by Ang?

Question B: What fills us up with joy? 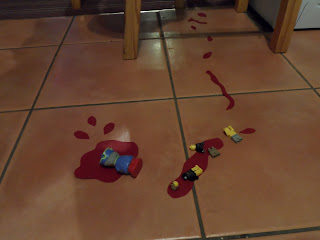 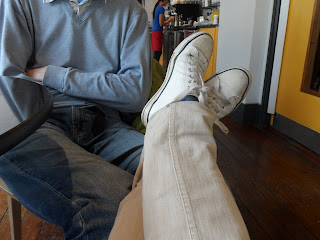 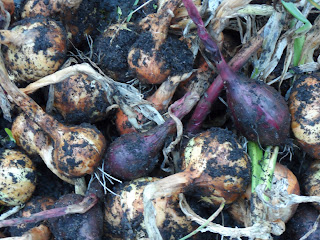 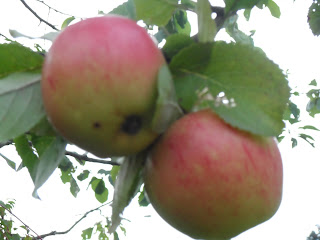 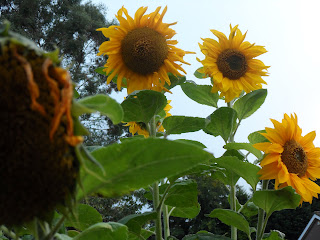 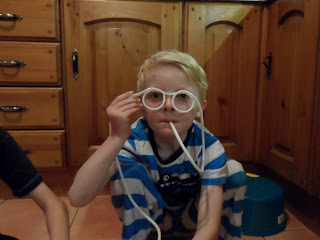 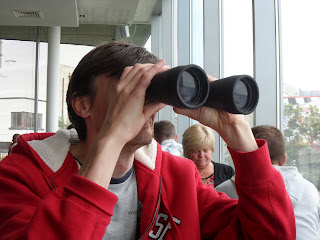 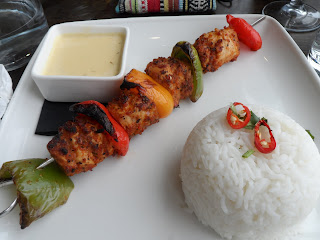 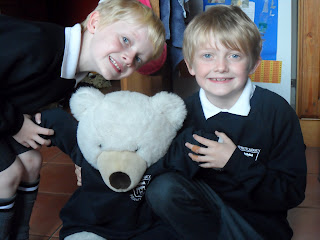 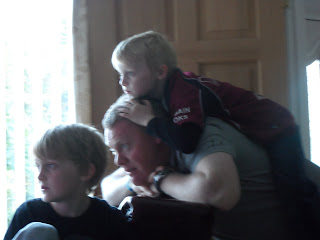 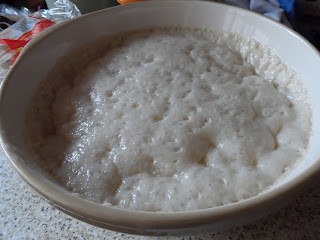 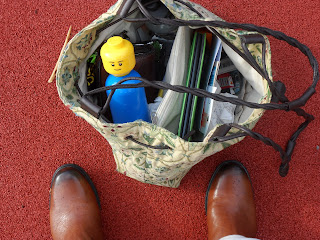 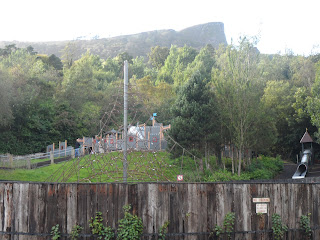 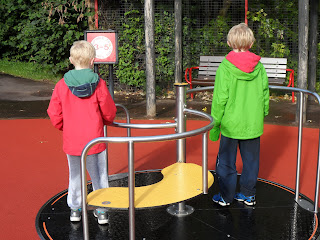 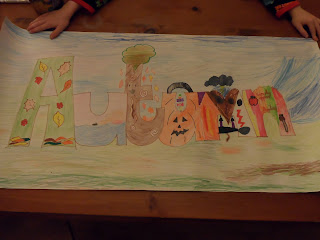 Answer A: Ang brought crime scene tape, which needed a crime scene, and milk sucking straws which needed a tiled floor.
Answer B: Candy Apples!
Answer C: It's Herman the Sourdough, whom I think I've killed since taking the photo. But it's all right, we have the crime scene stuff...
at September 16, 2012 8 comments: 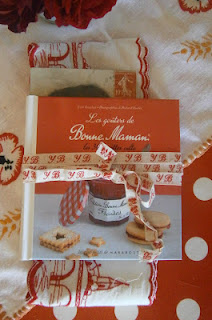 I'm a very happy maman ce soir! The weekend commenced tres bien indeed when Cooking Catherine took me in hand and to her favourite clothes shop to find a dress for The Very Stressful Boum to which le Prince Charmant et moi sommes invited demain soir.

Puis we went for un petit cafe dans un petit cafe which is also tres bien, and then I came home to visit les fraises briefly before heading out with the two other P6 mamans whom I love and adore for their grounded hilarity in the face of ridiculous school events about which you will be hearing tres beaucoup as the annee progresses.

Apres which I checked my email to find that Ang was congratulating me on having won Floss's giveaway. Quelle surprise! Merci beaucoup, Floss (et Ang), j'en suis tres contente!

ps No comments on the lack of accents, s'il vous plait. This is not a clavier francais and it is also assez tard!

Email ThisBlogThis!Share to TwitterShare to FacebookShare to Pinterest
Labels: giveaways, Transference of Emotion

Trolls and other chapters from my Fairytale Life 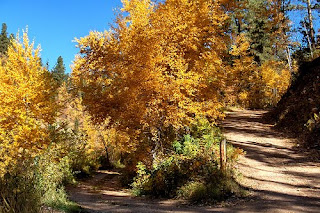 Thank you for your kind concern- especially, Dormouse, if you popped back to check on me! I am still here, and am very happy. I needed neither to call 999 (because the Principal patrols the corridors) nor consign my children to the fate of the latch-key (though they were quite looking forward to that bit).

I don't talk a lot about work, because I too, Frances, am bone idle. But perhaps I should clarify how it came about that this fraise came to have a wholly schizophrenic relationship with the work ethic. So, at the risk of turning each post into a Robert Frost tribute, here we go with chapter one:

I used to work in one of this little nation's finest schools. It is a very fine school. Obviously, therefore, it would be madness to leave. But I had had two suns in seventeen months, was teaching A-Level to young women ravenous for perfection, and thought I might implode if I had to do numbers 1 to 100 in French with a sixteenth cohort of eleven year olds whose Primary School teachers all thought that neuf rhymed with Smurf.

In my leaving speech I did confess that "I took the one less traveled by", and frankly "that has made all the difference". I firmly believe that women can and should work full-time as well as bring up children, if that's what they want. It just didn't work for me.

So here I am, doing bits of this and bits of that, and quite a lot of the other at the minute. Not quite a full week this time, but there was half a day on Monday and all day tomorrow, which is all good. And I'm nearly ready for the other thing I have to go and do after school tomorrow... 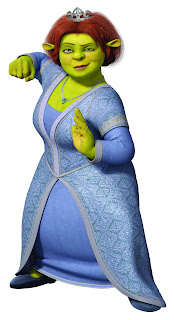 Many things have made me smile in the midst of rediscovering the joys of marking and inventing worksheets. One afternoon I decided to delve into the previously unopened Spam folder of fraise lach. Gosh. It really is a good idea to ban anonymous comments! Many were lovely. If that was you, thank you very much! I'm so sorry that I ban anonymous comments.

Many seem to have been commercial although, since they were written in Russian or depressingly incomprehensible French, that is admittedly a guess. Others were brilliant. Quite fabulous. I had a tiny post ages ago, which really just linked to Hookery the morning Heather Boss and I went to St George's Market. This prompted the question, "Is smoking m_____a good for hyperthyroidism?" I don't know, friend, but I wouldn't have thought so.

More recently I described a very lovely weekend, but one that will apparently lead to a sad and unfulfilling life. The thing is, fellow traveller, unlike roads in yellow woods, this is my fairytale and I know exactly where it's going! 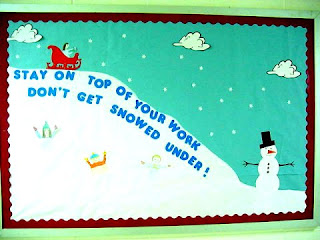 I love Nanny McPhee. I love both movies. I very much love the end of the first film with all the snow in August. Enchanting. It's not so much snow in August as snowed under in September here this week.

This is why instead of showing you fabulous pictures of our shiny new uniforms, heavily hanging apples, plentiful onions and stalwart cyclmen, I am in fact bowed in admiration for women who can work full-time, get children's homework done and maintain a functioning house. And as for single mothers who manage this all by themselves...

I said I would do a full week of substitute teaching in the very local school whose hours are so in tune with the boys' times it's fabulous. Especially now that poor Jo has to stay until 3pm as well. It was supposed to be easy!