In "In This Life" 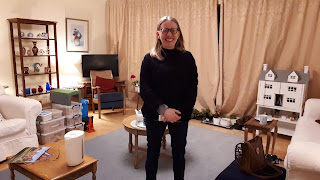 Pam, thank you thank you thank you! Thank you for letting a completely unknown person arrive late at your door one dark and rainy Friday night! Thank you for your tolerance of her inane excitement at being in your living room. Look, here I am in your living room! (There I go again...) It's just that I have read and loved your beautiful, poignant In This Life words for so long that I was really quite overcome at being in the same room as the train tracks and the dolls' house and the wonderfully intact glassware.


Thank you for tea and cake (and please forgive me for posting the picture of the kettle). Thank you for putting me on the right bus for the stage of my Edinburgh adventure. Thank you for your welcome and your hospitality and for your words. Thank you every post for your words, even the 'solipsistic' word. I've been looking at its definition for a full five minutes now...


Sorry that it has taken me a week and then some to thank you here! A wonderful weekend in Edinburgh is suddenly in the past. But the blessings it brought are still very much bright and lovely! Hopefully more on the rest of my weekend soon - with lots of thank yous to Sandra who may be landing back in the States anytime now.

Email ThisBlogThis!Share to TwitterShare to FacebookShare to Pinterest
Labels: Blogs 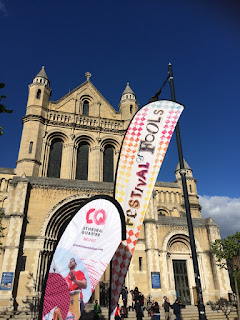 Ages and ages ago we used to take small boys into Belfast every May Day weekend to watch the Festival of Fools. I'm sure I've blogged it before. Street performers doing hilariously and often terrifyingly insane things in every little square around the town. Then strawberries grew up, and expressed opinions. Years passed!

Last weekend, however, we deemed ourselves not quite too cool for a fool, and in we went again! Hoorah. There were fools; there was hilarity; there were tricks; there was food in very trendy watering holes. 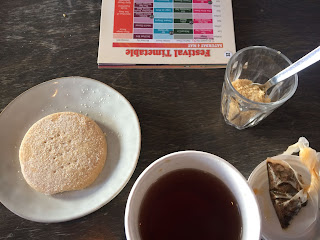 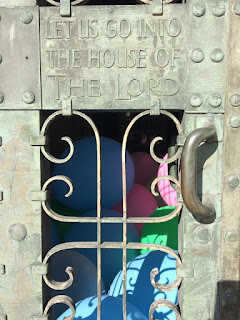 Nonetheless I must confess that to see pictures of fools you'll need to insta Jojo﻿, if that is indeed a thing. My camera phone died because I was taking so many photos of the ground in Writers' Square. It will come as no surprise whatsoever to you to learn that the ground in Writers' Square is covered, absolutely covered, in quotes from Northern Irish writers. Had I made this connection? Ever at all? Hey ho no nonny nonny.  Who wrote the poem in the first shot? Answers on a virtual postcard! 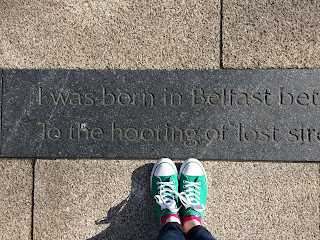 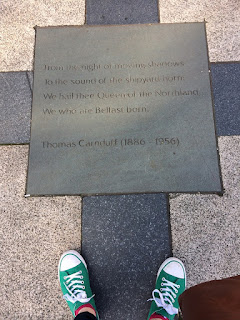