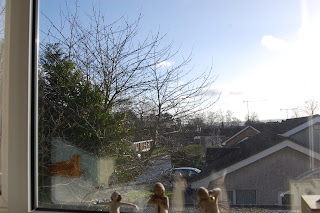 Look what arrived yesterday- blue sky and streaming bright light. Gulps of light flooding rooms and streets and minds. Oh, but it's very good indeed! We went to Crafting Catherine's yesterday morning for her (not in the Bean) Bean Birthday and I could feel the heavy burden of January lifting off- last day today. 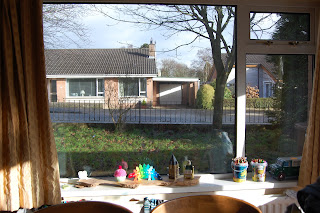 What you can't do from just photos is hear the whistling wind. Whistling, storming, invading wind clearing a way for the blue sky and light! We have a kite stuck in the lilac tree out front and I haven't yet gone out to extract it, because I do quite like the thought of it working free and flyng who knows where. (Though I will go out to extract it soon, because it will only fly straight into someone's windscreen or small child. Probably mine!) You can just see my first crocheted cupcake basking in the sun- more of this anon. 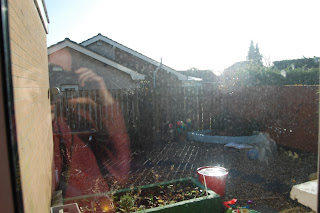 And no, I have not yet tidied the back garden, nor washed any windows, though the washing of windows is now a priority since the Arrival of Light. Look at all that light, reflecting and shining and filling everything up. Thank you; Light, you have arrived, as always, at just the right time!

Email ThisBlogThis!Share to TwitterShare to FacebookShare to Pinterest
Labels: Bean Craftin', housework, Things I Have Actually Made, View from my window

Here it finally is! A really super video on Rend and church and community and faith. Prince Charming is very easy to spot- female fraise makes brief appearances! And if you'd like more music, try this- don't know that our voices are quite so easily distinguished in the crowd!
at January 29, 2013 5 comments: 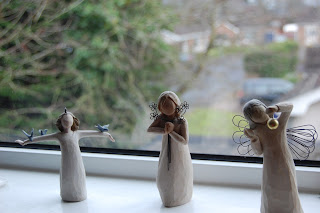 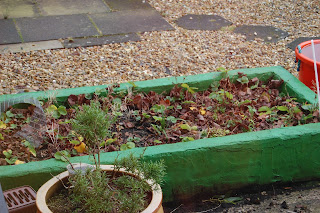 Another close-up- the strawberry bed whence cometh fraise lachrymose. I would have had a very lovely explanation of fraise lachrymose for all you lovely Grow your Blog folk who signed up, did lovely posts and giveaways and then visited all the other participants. I, however, live in a constant muddle and didn't quite achieve any of the above! Hence another close-up. I had fully intended to de-muddle the back garden before this week's shot, but the Weeble house is still strewn all over everywhere so here's some exciting strawberry hope instead! 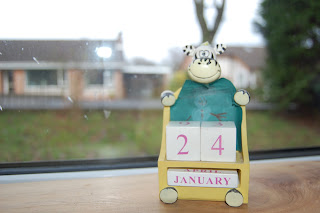 The really annoying thing is that, between last Thursday and this Thursday we have had lovely, lovely snow. It actually came and went three times in as many days. But still didn't manage to last until today. Except up on the hill where my parents live. We spent some time trying to dig them out this morning, for bank appointments and sanity concerns!  So no snow in the low suburbs side garden, though Angela will note that at least I made sure that the correct date was showing! (That is the correct date?)
at January 24, 2013 10 comments:

Email ThisBlogThis!Share to TwitterShare to FacebookShare to Pinterest
Labels: Blogs, snow, View from my window

Warning: layout a complete shambles below! Troglodyte incompetence at its worst/best... 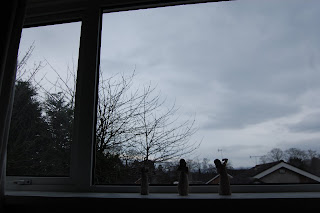 I have been reading Jane's View from my Window for ages and with great fascination. Every Thursday you get to stand inside Jane's home and look out at the Canadian woods. It's snowy there just now. Winter perfection. These however are the views from my windows. Heavy snow (or indeed heavy rain) is forecast for us over the weekend, and we do so hope it (not the other) will come! 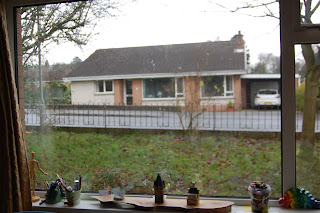 What we have in abundance are grey skies. Not the brooding, foreboding, interesting genre of grey skies. This is more the gradually opressive, take away all the colour and paint the world vacant sort of grey sky. I think I've seen blue up there twice since New Year! ﻿ 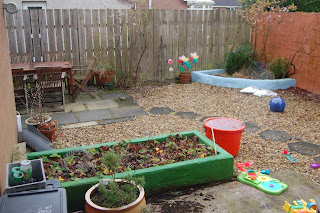 This is our back garden. You might notice the remnants of civilised, pre-parenthood, social existence. Maybe I'll take up archeology and excavate some of those things at some stage. Colour, that's what children's things instantly bring, though, isn't it? Bright, primary coloured certainty. You may notice that, despite our proximity to Belfast and her City Hall, we have no flags flying here in Strawberry Land. Not even on royal birthdays! We'll take our colour from the little, joyous things things instead.
at January 17, 2013 13 comments:

So how are you all uploading your pictures? When I click on the little image icon I have lots of choices- but none of them are the computer. When I click on upload, I get a message telling me that I can upload jpegs etc but nowhere can I click to browse anymore.

Do I need to be using Picassa? Horror. Though even that might be preferable to having a clever phone. Pease tell me I don't need a clever phone!
at January 08, 2013 13 comments:

Email ThisBlogThis!Share to TwitterShare to FacebookShare to Pinterest
Labels: Blogs

It's actually been a case of four going mad in this house since Christmas! But I have found one way of maintaining a semblance of sanity. The principal solution seems to be the tactical ignoring of everyone and everything, but this only works up to a point, as my years in the classroom should have told me. So, for the last two nights I have embraced the terriblision.

Since the digital thing I have admittedly made absolutely no effort whatsoever to fnd out anything at all about the overwhelming and incomprehensible array of lots of things to watch, But no longer! Last night I discovered that a careful use of the Guide button could transport you instantly to wall-to-wall Location, Location, Location and thence straight into uninterrupted episodes of Doc Martin.  Good grief!  Bliss.

Tonight I couldn't find the same select selection, and thought that we might see what all the River Cottage fuss has been about. I know. I come ridiculously late to all things. Ask anyone.  The suns and I curled up with Robert Webb, Ruby Wax and Lee Mac, learning to cook the River Cottage way. If I say that all three of us were entranced enough to stop bouncing off sofas and each other, you'll understand.

Up until now I have thought of Hugh Whatsit as someone very esoteric and unpronounceable.  Henceforth however Hugh Fearnley-Whittingstall will be the TV hero who had my two young men discussing the relative merits of wilted spinach in your pancakes and bechamel sauce supper. And I will very soon be trying out that Victoria Sponge equation- weigh the eggs first and use the same weight of butter, sugar and flour. Boys very impressed with the cakes.

I did find some gorgeous images of the River Cottage three going mad in the Wisley-esque kitchen garden, but Blogger still seems to be blocking pictures. At least it has stopped blocking the blog list- I couldn't find any of you earlier, and then I felt very lost indeed!
at January 06, 2013 5 comments: 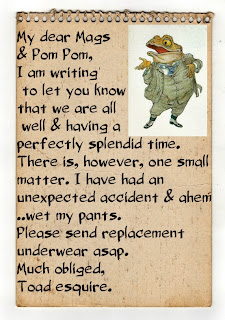 I nearly typed in "Last Misadventure" as a title, but decided that it would tempt Willows' fate too greatly. They must still travel from New Zealand to Colorado before this Grand Tour of the Whole World completes its merry round. Mind you, they'll have to drag themselves away from Angel Catherine first. Mo mean undertaking when the sun is shining in full bloom of summer there. I certainly wouldn't be venturing out of the hobbit hole that Strawberry land has become for anything less. Not if I had my choice!

But I don't. A new year and a new term are upon us. Onward, fraise! And a happy one may it be for you all x