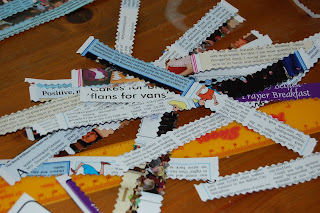 In the first episode of Mollie Makes I was particularly fascinated by Lola Nova's Happy Little Garlands. She used up charming strips of material left over from gorgeous sewing projects and stitched them onto card, then cut into pendants. I, obviously, don't have the same strippy stash! However, as I wanted to make bunting for the Mothers' Union noticeboard, I decided to recycle old MU magazines. 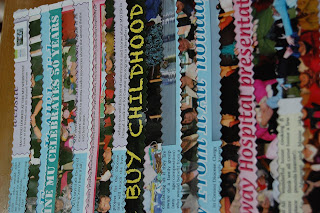 Also, being that sort of teacher who likes nay obsesses about displays that are as creative as they are instructional, even when she has taught only very part-time for ages and won't even be doing that for more than a fortnight now, I decided that the bunting might as well have little snippets of MU life! 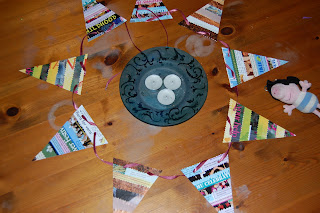 I am very pleased with my meagre efforts- not least because it means that I have made something real in June, instead of messing about with metaphysical alternatives! Now I just need to find creative and instructional material to fill the noticeboard! All suggestions on noticeboard use will be very graciously received! 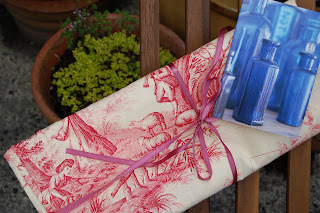 More than graciously received, but indeed extremely joyously received was the amazing toile de jouy that arrived yesterday from Mise. Oh my! I am instructed to make something pretty therewith. Well, the ribbon now holds the bunting, but My Marvellous Mother has not laughed at the suggestion that I could make a dress. We shall see! 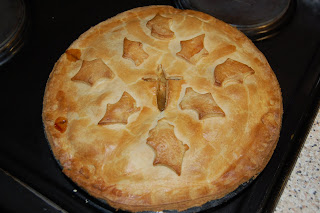 Finally, I made an apple pie. The stunted holly leaves are supposed to represent Pentecost's tongues of fire! Interesting conversation that provoked- suns have never batted an eyelid at the idea of Jesus healing and coming back from the dead. But that His Spirit might make everyone speak in different languages? "That's impossible. Jo, you would be able to speak French. That's a miracle!"
ps Blogger, which won't let me comment chez anybody, also won't let me see who has arrived at the Patch to bring the Strawberry Pickers up to fifty. But apparently there are fifty wonderful, generous folk who call now and then to see how tearful things are! So, to say thank you and gosh, thank you again- I'd like to offer a Happy Little (Mothers' Union/National Trust magazine themed) Garland as a giveaway. Leave a comment and one will be picked!
Posted by magsmcc at 22:44

Loving the bunting
thought about you today and wished you could havce joined our london jaunt!
blessings xx

Well, I'm clapping for you because the bunting is lovely. I'm not having success with my Mollie Makes hunt. Two strikes yesterday. Dash! It's supposed to have hit the states, but all I get is bewildered looks from store clerks.
A pie? With tongues of fire? WOW! You are amazing, little Mags!
Bill's in London! He sent me a photo of Big Ben. He's there with a friend and the friend's son. His next stop is Germany. Next summer, we both shall arrive at your doorstep!

I am loving the tongues of fire. I am under the weather this weekend and can't make it to church for Pentecost, so I am even more thankful for your homey reminder.

It also happened to me just a couple of days ago, that Blogger would not let me see my Followers list. But eventually, when I clicked on the link and it said, Loading, it did load the list after several minutes. Yours will probably be restored someday!

Hi there - lovely bunting and cake - and I think the best creations are the ones used from frugal resources and for good use - your Mothers' Union needs you! Some of us have found with blogger comment problem that when you sign in if you don't check the box that says 'keep me signed in' you will find you can leave comments - although it's a nuisance having to sign in all the time - the followers problem, not showing on your blog, but they might be visible in your dashboard. Betty

G'day. Love the bunting, what a great idea with the strips of material and that apple pie looks ever so YUM. Take care. Liz...

Mmm what an ever so delicious looking apple pie...with tongues of fire! I am quite attracted to bunting/banners at all times, they always seem to make things look festive like you mean to be doing that & today is a good day. Love yours. Have seen a simple one recently made from old maps from an upcylced tatty atlas..the two pieces sewn at the top. You sound as if you are having fun. Much love Catherine x

Arent kids funny:) And how creative your are with your tongues of fire on a pie! Love that!

A dress! How brave that is. Even vague half-thoughts of making a dress are brave. The bunting is beautiful and the pie enticing.