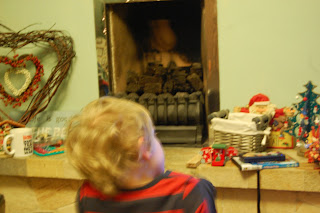 Please help me! I am trapped in a land of perpetual Christmas. 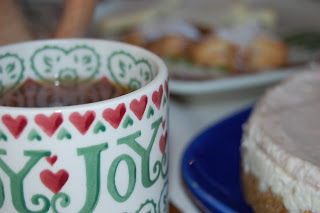 Everyone has been sick since Christmas Eve, and, despite managing to pull off two days of surprisingly great food and lovely relaxed times, we have not been able to leave this house. 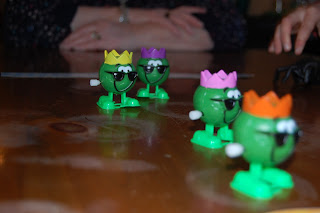 It is a surreal existence. Heads have had to be physically extracted from chimneys. Sprouts have been racing down the table. 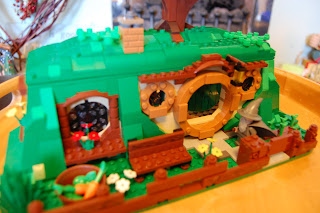 Hobbits have taken over the front room.  Sorry, I meant to say Shire. 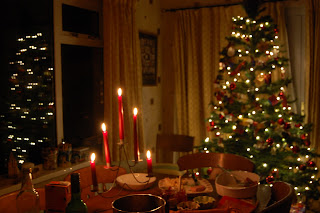 The hours of the day are marked by feeding sessions only. 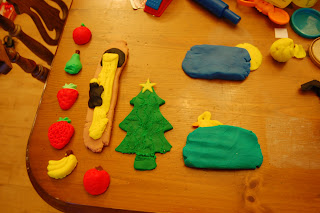 And I am constantly being quizzed on what fairy tales I can see in playdough creations.  Is there a life outside these walls? Will I ever emerge? Is anyone out there? AGHHH...... 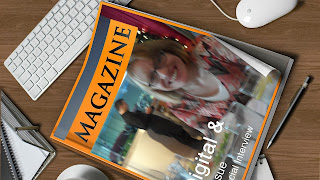 From our land to yours- a most Merry Christmas! Thank you for the wide horizons that open up from this tappy keyboard, and for the ideas, thoughts, inspirations and encouragements that you all share so freely and so beautifully. You are lights shining in the hundrum domesticity at all times of the year!  I look forward to reading you more in 2013 xxxx

Fourth Sunday in Advent: Only one guarantee 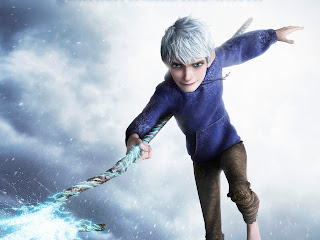 We went to see Rise of the Guardians on Friday when the guys finished school for Christmas. Interesting movie. Prince Charming didn't read it as a secularisation of Easter, and I'm quite sure the suns didn't either. Anyway, on the way home Belfast Lough was so covered in mist that you wouldn't have known that there was a city at the end of it at all. So we decided, in true Rise of the Guardians philosophy, that if we couldn't see Belfast then no-one must believe in Belfast. 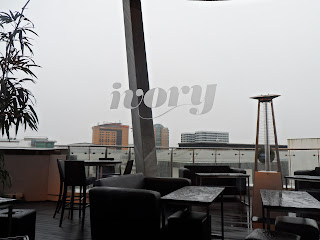 I was thinking about this when we all went to Ivory for lunch yesterday. We were out on the balcony that usually has fairly super views overe the city's skyline, but the same mist was shrouding all but the nearest buildings. Maybe nobody does believe in Belfast anymore, I thought. And right on cue a merry band of flag protesters appeared right beneath our feet. 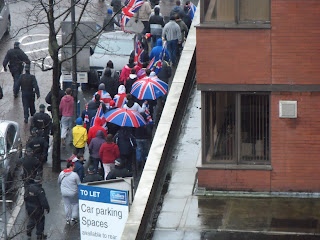 On their way to the City Hall again, I suppose, at lunchtime on the last Saturday before Christmas. Nice afternoon for the riot police trailing along in their wake. No doubt they'll still mention Titanic Belfast and the Queen's handshake when they review 2012, but you can see where it will all end. 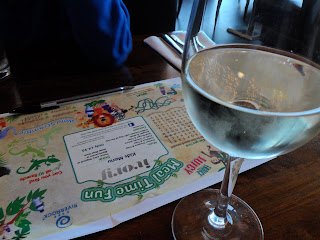 We took refuge in wine and wordsearches! Here in Strawberry Land we are shaken by recent events all around us, but also by a frightening toll of marriage breakdown with family and friends. As Advent draws to a close we are clinging to the job that the baby came to do. 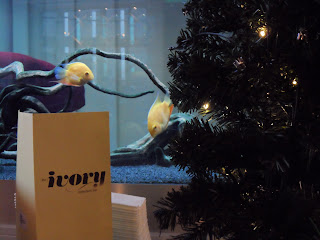 We had gone to the Ivory for lunch because it was our fourteenth wedding anniversary- for which ivory is apparently the traditional gift. Not wanting to have dead elephant on a shelf, however, we all had a really lovely time in the restaurant high up in Victoria Square. We had a table between the fish tank and the screen showing Elf. The marriages in trouble around us have all clocked up more than our fourteen years. No guarantees in life, I do often say. Except one. Except one Prince of Peace. 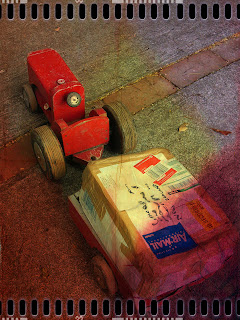 In the bleak midwinter frosty wind made moan. Earth stood hard as iron, so the Willows flew to the Sun. 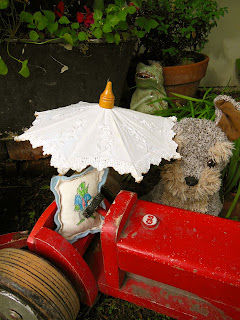 Snow had fallen snow on snow, snow on snow. But Toad needed a parasol to keep the sun off when out and about in his open top tractor. 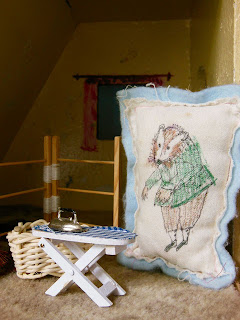 In the bleak midwinter, the only thing the Willows had in common with a preceding host was the need to keep ironing so that there might be room for the roast beast feast in the dining room. 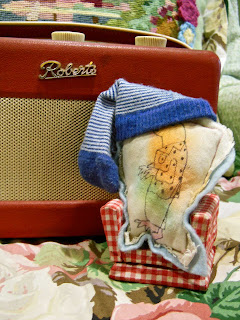 In the New Zealand midsummer poor Mole needed both sunhat and regular snoozes. 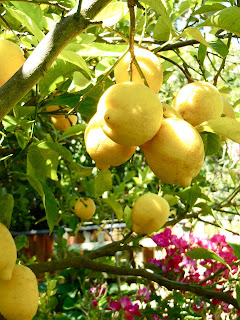 If it's dark and drear where you are, I would highly recommend festive visits to Angel Catherine in her Garden.  The boys are soaking up a whole new way of Christmas!
Posted by magsmcc at 20:09 3 comments: 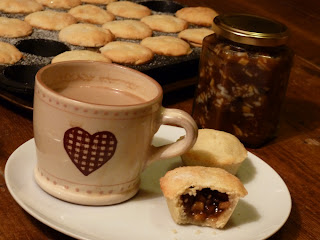 Gretchen and I would like to know about your favourite mince pie recipe. I have a traditional strawberry recipe from Good Housekeeping Magazine's December 2000 edition. My Christmas Cake recipe comes from there too and it is fabulous. But, to be honest, the freeze ahead mince pies have never been fabulous.  They look a bit like these: 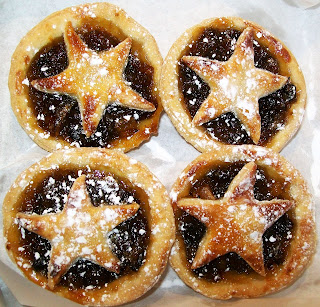 When I think I'd rather they looked a bit like these: 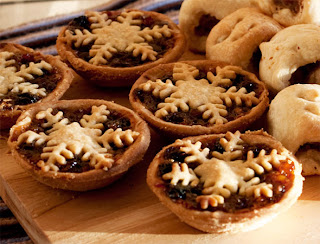 Now the Platonic Ideal of a mince pie recipe doesn't have to look as progressive as these next ones: 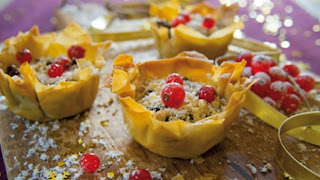 I'd be very happy with an ordinary but muchly tasty mp, just like the one I had heated with cream in my favourite Belfast coffee shop with my favourite Prince today. Mmmm. Misty week before Christmas, nice and early in the day, before the rioters are out of bed.... 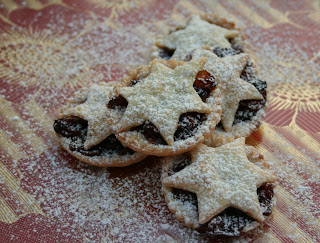 So. If you have a preference for Delia or Nigel or Nigella or Jamie. Or if you have a link to The Best Mince Pie in the world, Gretchen and I invite you to let us know! Maybe you'd even like to blog the archetypal pie and we could enjoy it vicariously? There are so many pies out there, and only seven sleeps left!
Posted by magsmcc at 21:14 8 comments: 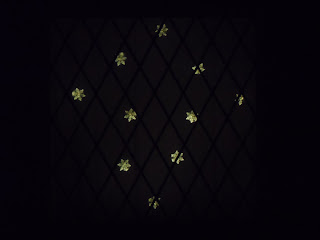 The Life-light was the real thing: every person entering Life he brings into the Light.

He was in the world, the world was there through him, and yet the world didn't even notice.

He came to his own people, but they didn't want him.

But whoever did want him, who believed he was who he claimed and would do what he said, he made to be their true selves, their child-of-God selves.

The Word became flesh and blood, and moved into the neighbourhood.

We saw the glory with our own eyes, the one-of-a-kind glory, like Father, like Son, generous inside and out, true from start to finish. 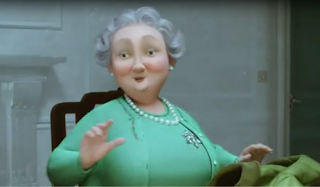 Today I have:
The question now is- what would Margaret Claus do next? Would she go to bed with Father Christmas, or would she stay up and make the shortbread for the second of tomorrow's two parties after the Sunday School Nativity? I think we all know, even if we haven't seen Arthur Christmas! I am very much looking forward to tomorrow's Pause! (It just might not happen until the last mulled pie has been eaten...)
Posted by magsmcc at 23:27 5 comments: 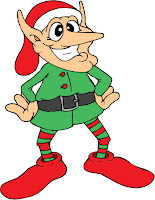 I blame their school. All week it has been frosty and therefore slippy in the playground and we couldn't risk anyone falling, so they've been straight inside in the mornings, and inside at beaktime, and inside at lunchtime. Also admittedly we haven't walked once this week for much the same reason. Although I have been late to rise...

So I have two boys bounding with energy. One of whom is particularly bounding with energy. The singing one. Lots of boundless bounding. And singing. So tonight, after homework, I did something we haven't done for years. We put on coats and hats and gloves and went out to bound in the streets. Ostensibly we were counting how many Christmas trees had gone up on the avenue and around the block (24- appropriate number for the month). But actually we were working on the bound level. On decreasing the bound level!

And now, because the baked potatoes are still baking, we are researching Christmas trees. We got as far as here and stopped. We have found a bounding project- can you guess which one? It's not the one below, although it is my personal favourite. I like the atmosphere of utter unboundlessness. Thankfully tonight I'll be at the Hookery Christmas party. By the time I return they might be in bed... 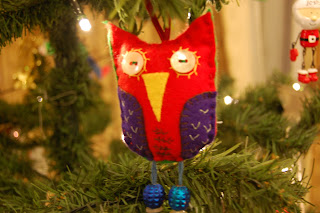 Thank you, Ang, for our wise owl who is now perched knowingly in the tree. He watches and listens and reminds me with a nod that peace may not just be what you get when the house, and the Land, is still and quiet. 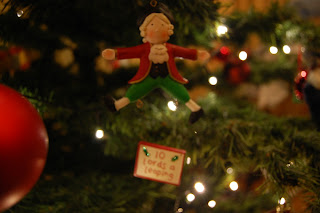 He speaks voicelessly of the peace that can hold sway even when the house is busy and the Land is divided and the lords are leaping and the tempers are fraying and the friction is close. 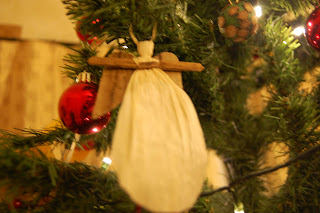 He gently hums this morning's carol, "Oh come, thou Day-Spring, come and cheer, our spirits by thy Advent here, disperse the gloomy clouds of night, and Death's dark shadows put to flight."

A rite of strawberry passage

I am sorry that I cannot marry you on Friday because I am too young. I hope that we can get married when we are 18 or up. Would you like to come to my house next Friday? 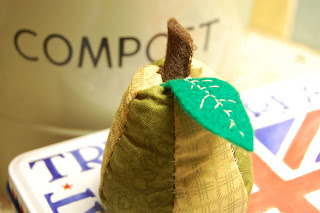 Well, we had our Preparing for Advent morning yesterday. It was wonderful!  Wonderful women who came and threw themselves wholeheartedly into all the activities- especially the pear-making! (Mine has only just reached a form of completion- you can see where it might end up if its quality were of the edible kind!)

I was so struck by all that worries us in the Advent season that I've posted it as a page above. We are buffeted by such a list of things to do and think about and accomplish. It was good to have a whole morning to set those aside and try to fill ourselves up on what Advent really means to us, what we really want to convey to our families and those around us.

Last year I put out our Advent candle holder and noticed that we had decorations that said Joy, Peace and Love so I hung them on it. Mattman came to inspect, looked me squarely in the eyes and said, "Mum, you have no hope for Christmas." How insightful that sun is!  I told some friends about this, and a few evenings before Christmas, Queen Niqi arrived with a packet of cookies for us, and chatted about this and that without my shaking the sense that there was something that she wasn't saying. Eventually "I didn't want you to be without hope this Christmas, " she said, pulling out a tiny package that held the most beautiful hand-sewn pillow of Hope you could find.

I think if I wasn't being constantly reminded that Christmas brought us hope, I wouldn't be in the slightest bit hopeful of achieving anything!  But the Life-Light is coming into our worlds, and not the darkness, the busyness or the shopping can put it out.