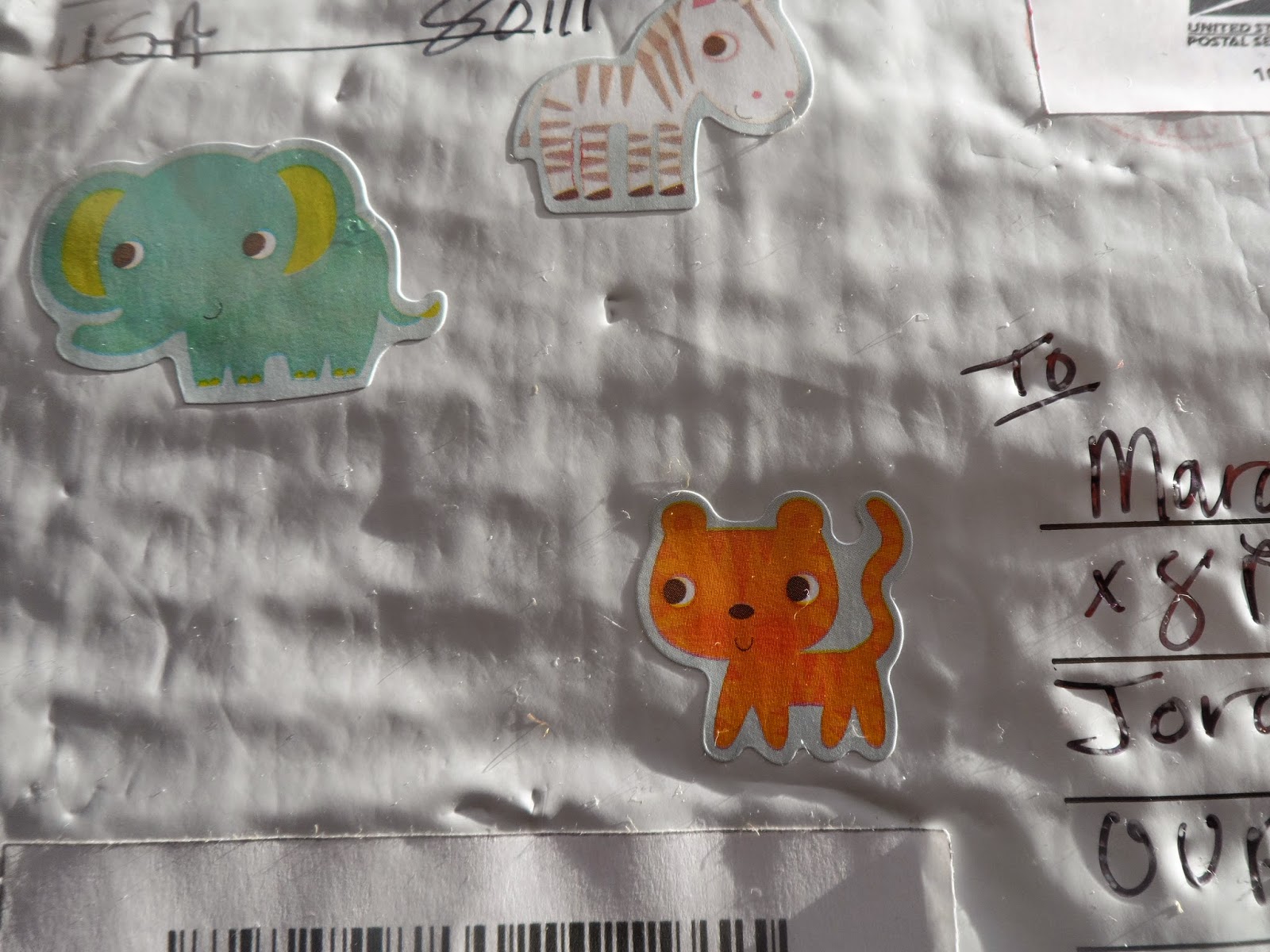 I suppose that most invaders of Ireland have arrived by sea. They also mostly seemed to have landed in and around Dublin before marauding around. Pillaging, converting or integrating as they saw fit. 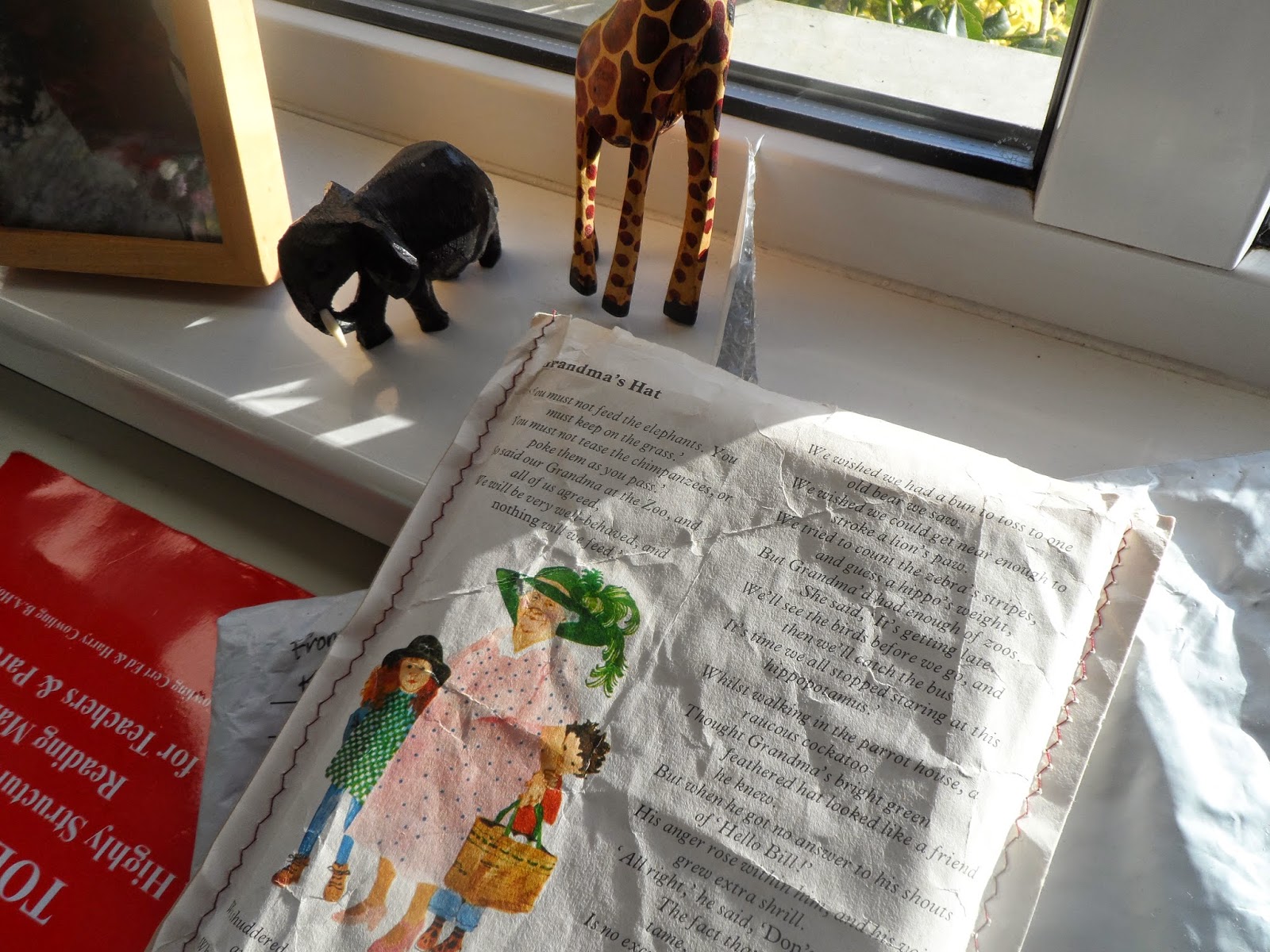 However the island's most recent arrival came yesterday by air. Packaged safely and snugly in fine words, with all his paperwork in order and a good book to guarantee his warm welcome. 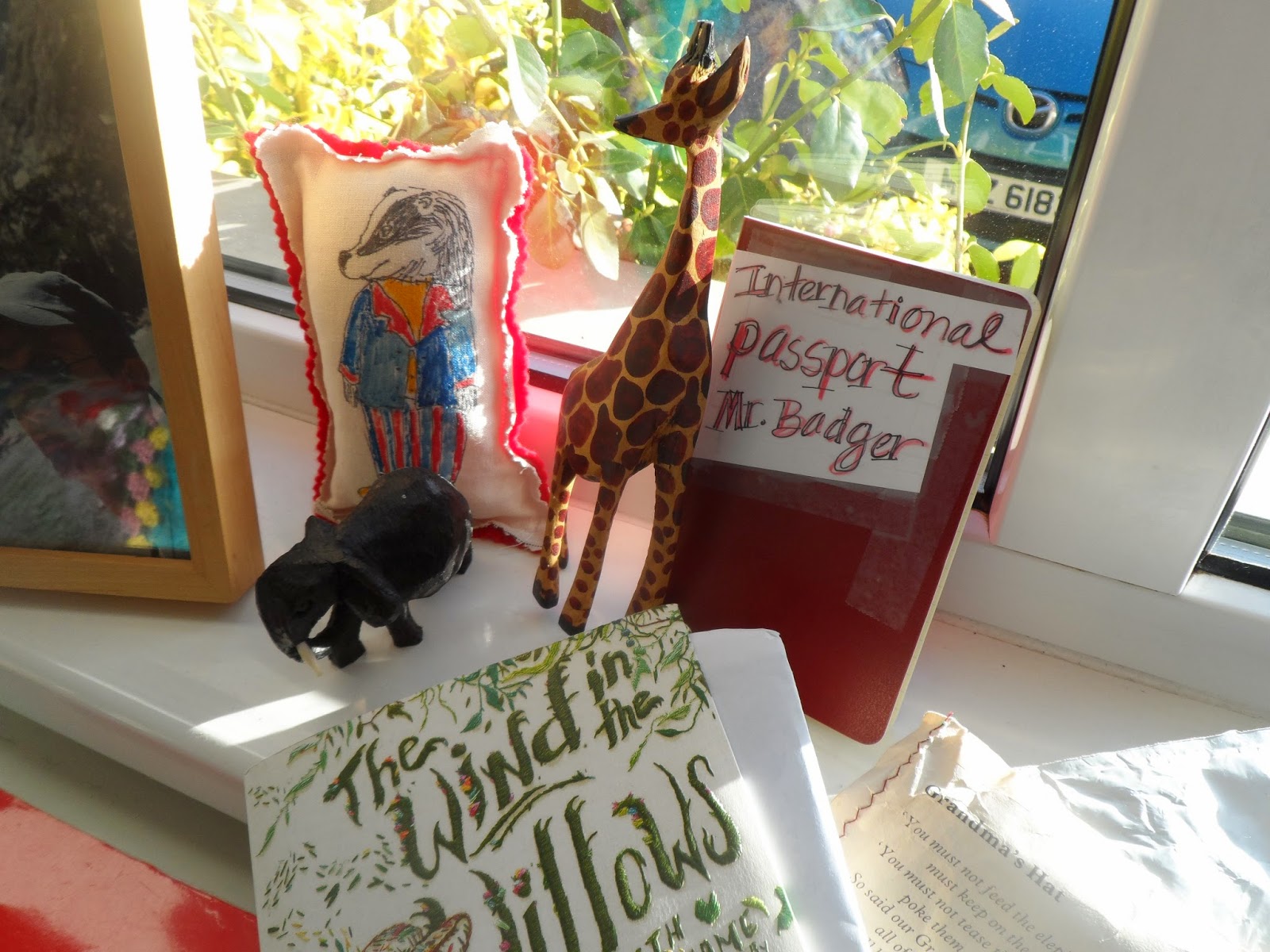 Which is uncannily similar to John de Courcy's conquest of Ulster in the months following his arrival in 1177. He quelled opposition and set about winning minds- he restored the holy Book of Armagh and used his research well:

Knowing the superstitious nature of the Irish, De Courcy spread abroad a legend to the effect that a prophecy of Merlin was fulfilled in his advent. The prediction was supposed to be to the effect that Ulster would be conquered by a white knight mounted on a white charger, and having on his shield graven figures of birds. He took care in dress and accoutrements to pose as the white knight, and thus gained credence for the tale, which, in addition to a prophecy of St. Columba that a needy and broken man, a stranger from a far country, should come to Down with a small following and possess himself of-the city, had its weight in a credulous age, and no doubt in some measure furthered his claim to be heavensent. As the news of his exploits spread he was reinforced from Dublin by large numbers of adventurers sick of FitzAudelin's pacific rule. 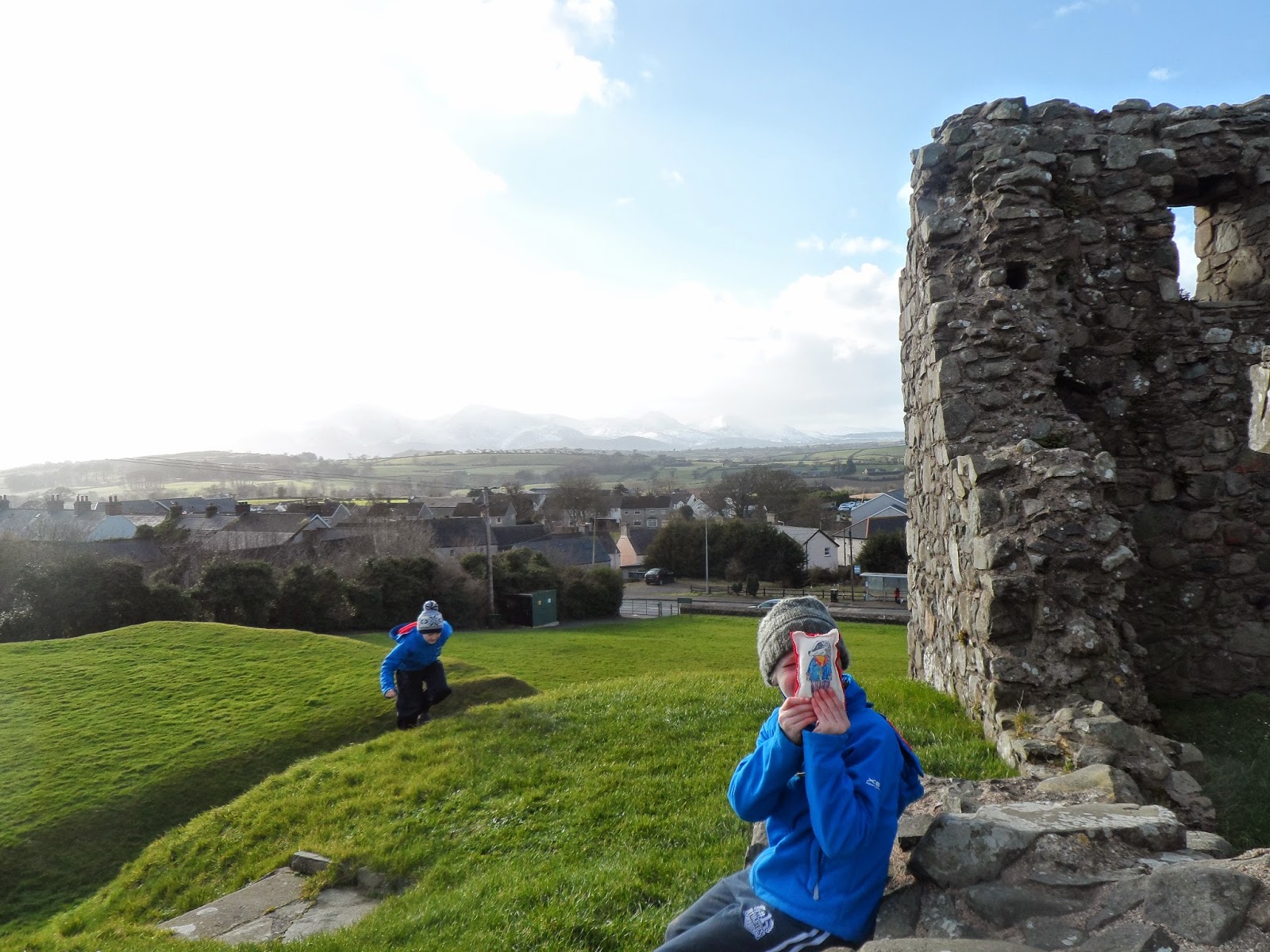 True to his Norman roots de Courcy built castles everywhere he rode, and we took Badger to two of them today. The first is impressively named Clough Castle, a stunning example of the Norman motte and bailey, with beautifully climbable remains of the keep. It sits right on the main road down the east coast to the Kingdom of Mourne. 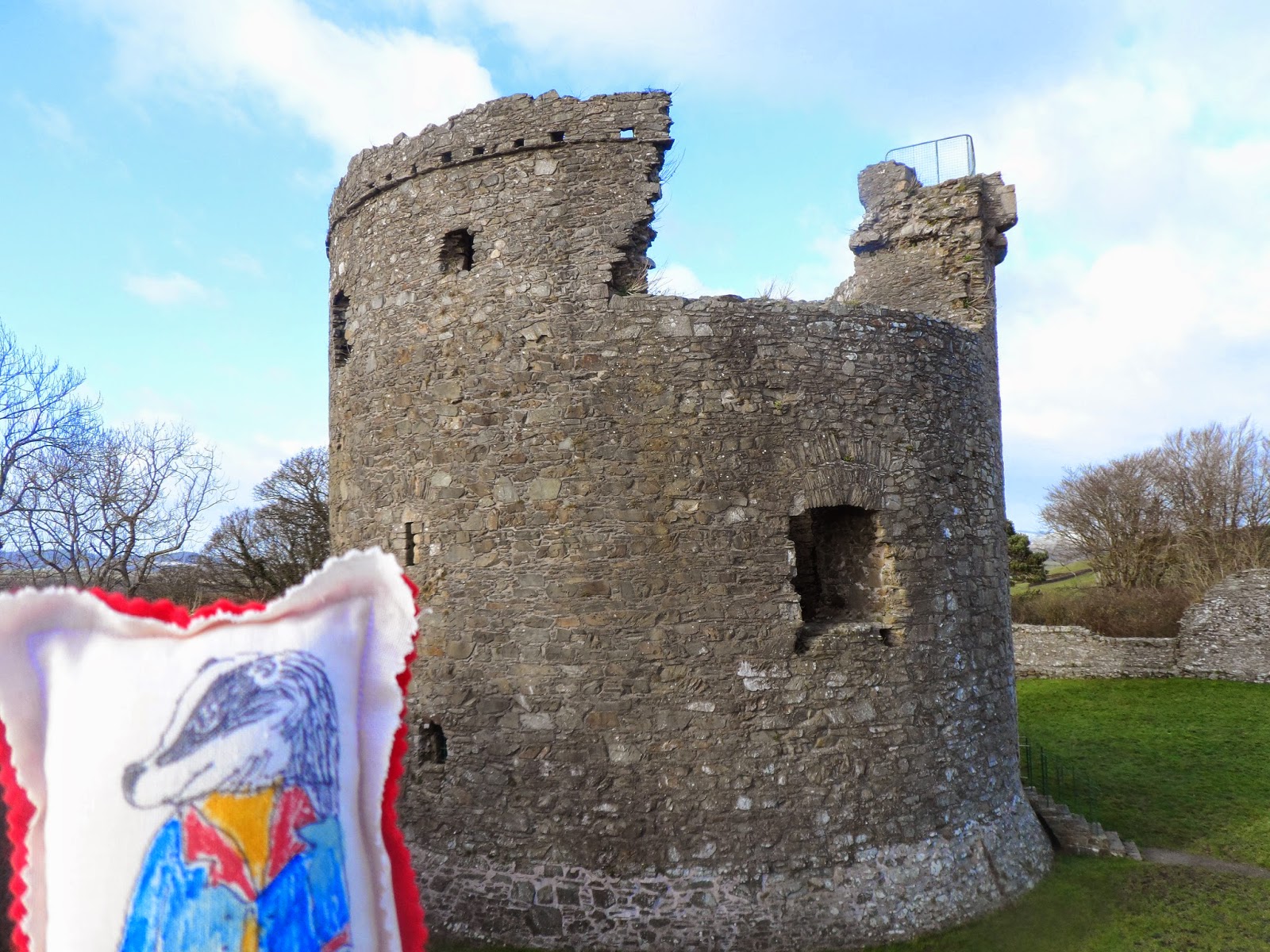 Then we found Dundrum Castle. This has got to be one of Northern Ireland's best kept secrets. You would never know it was it was there, but it too is a fabulous example of Norman conquest. Badger nodded in approval at the sturdy keep from his vantage point high over Murlough Bay. From there he could see his snowy destination... 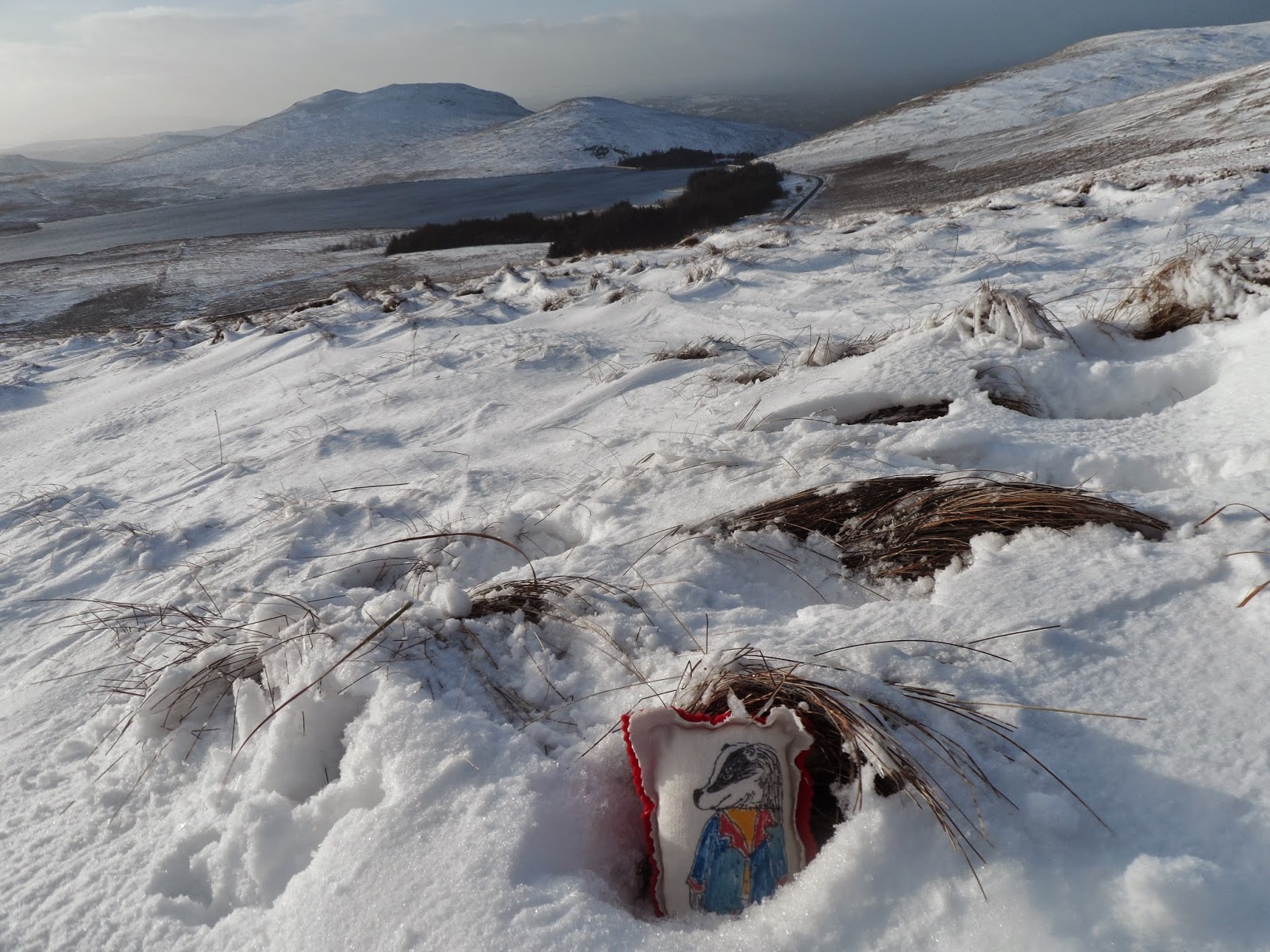 And so here is Badger de Mourne. He seemed ironically happy to carry some of Toad's grandeur into our mountain kingdom- I hope he isn't regretting leaving his friends behind. I must reassure him that Ratty and Mole will keep Toad out of mischief while he travels the world at his own pace. He is definitely happiest in a burrow, but was impressed at Ott Mountain and its sledging possiblities for energetic boys. And not a weasel in sight!

Badger will be here for a few weeks, and then we shall send him on- perhaps on Valentine's Day to another host. This is the first stop on a new Willows' World Tour- let me know if you'd like to show him your Kingdom before he wends his hygge way back to Pom Pom xx
Posted by magsmcc at 23:07 9 comments:

Finally views and snowy ones at that 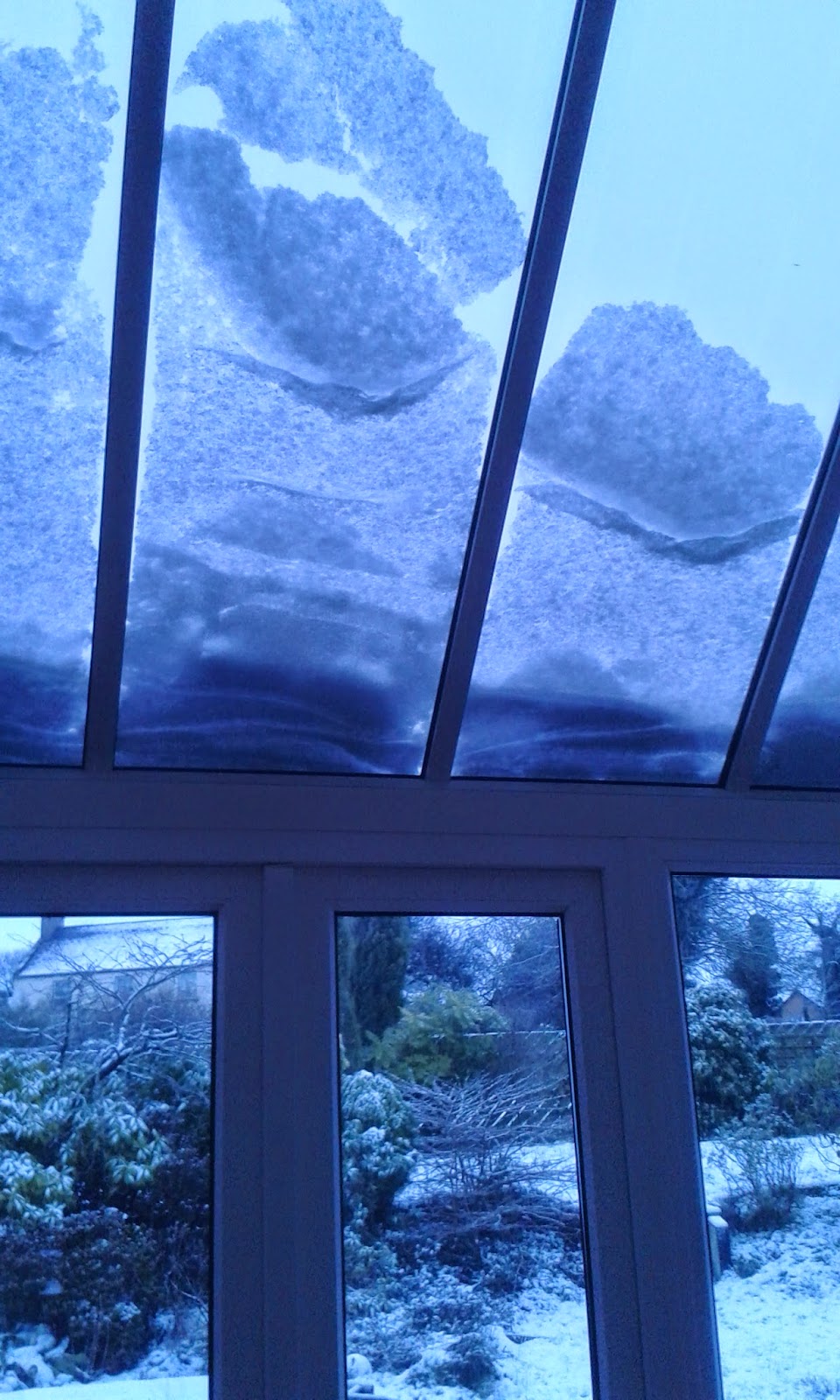 After three weeks of severe weather warnings and making sure each week that we have at least one tin each of soup and beans in the cupboard, we finally got some snow! It's been two years since our last magic carpet, and it's not much of a one at that- at least along this coastal stretch of a mostly inland lough! 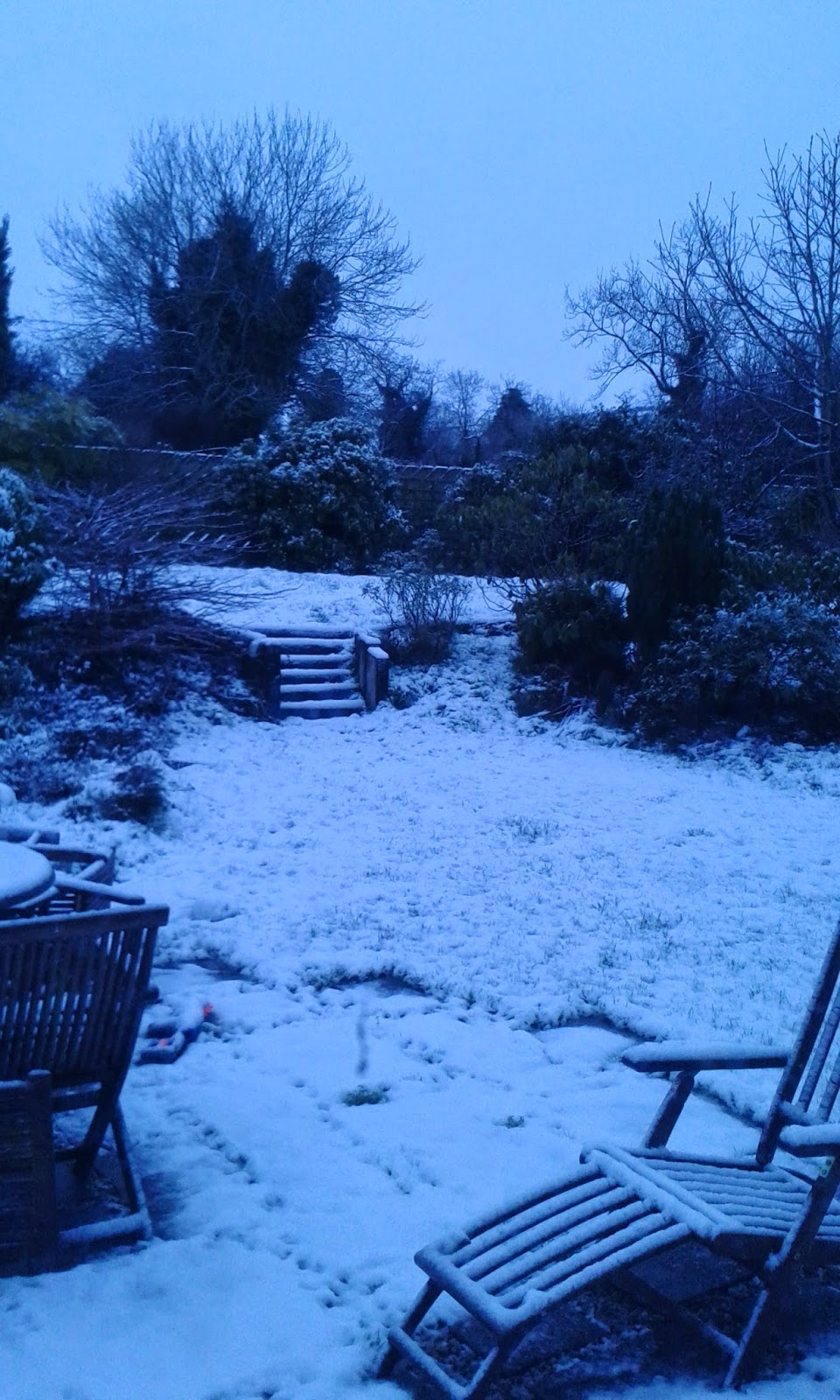 We were up and excited by 7.30 when it was a bit lighter than it looks here. Disappointed that none of our three schools had made the closures list, but I did get home at lunchtime- more to do with the severe lack of pupils than road conditions. I'm becoming fascinated by the tree outside the kitchen window. I sit and watch it before the light dies and wonder when it will manifest Spring. Not for a good while yet, I imagine, but it's a good thought. I don't usually struggle with January but this year's slight gloom will hopefully lift as the month turns. I was surprised when I logged on here to see that none of the blog posts in my head had ever made it to the blog, but that reflects most of my plans for the month really! 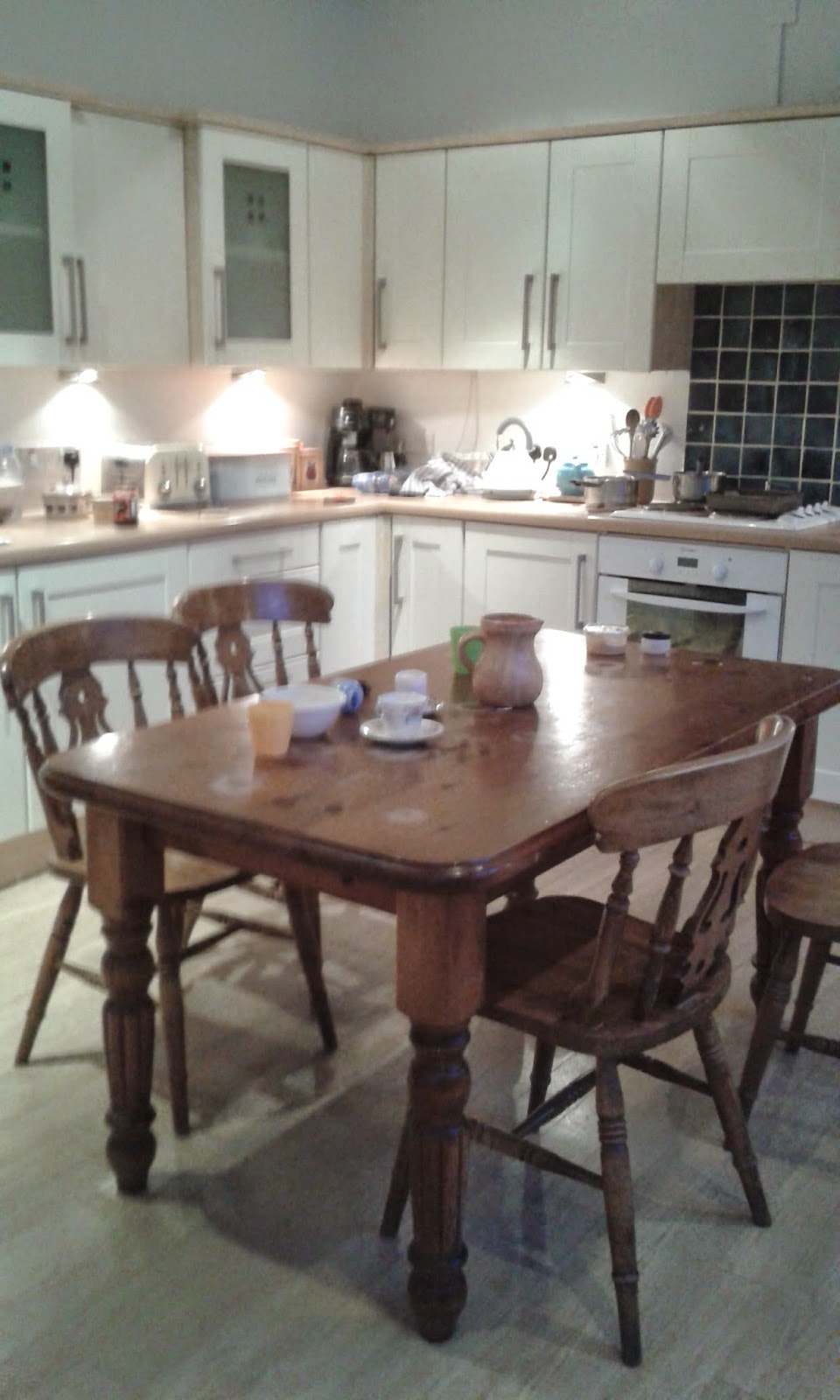 The reason why I can sit and observe my outside-the-kitchen-tree is that we gave in to the cold after New Year and moved our table from under the spectacular(ly freezing) window wall in to the warmth of the kitchen. Today was the first day I have been in the living room all week. Mostly now I move from table to kitchen job and back again. Usually with tea in hand. I do wander next door to the book room a bit more, I suppose, now that all the unpacked boxes of Stuff have been hidden in the spare room instead. Maybe that room will make a blog post soon. Probably in February....
Posted by magsmcc at 17:04 9 comments:

Views, hills and what comes from them 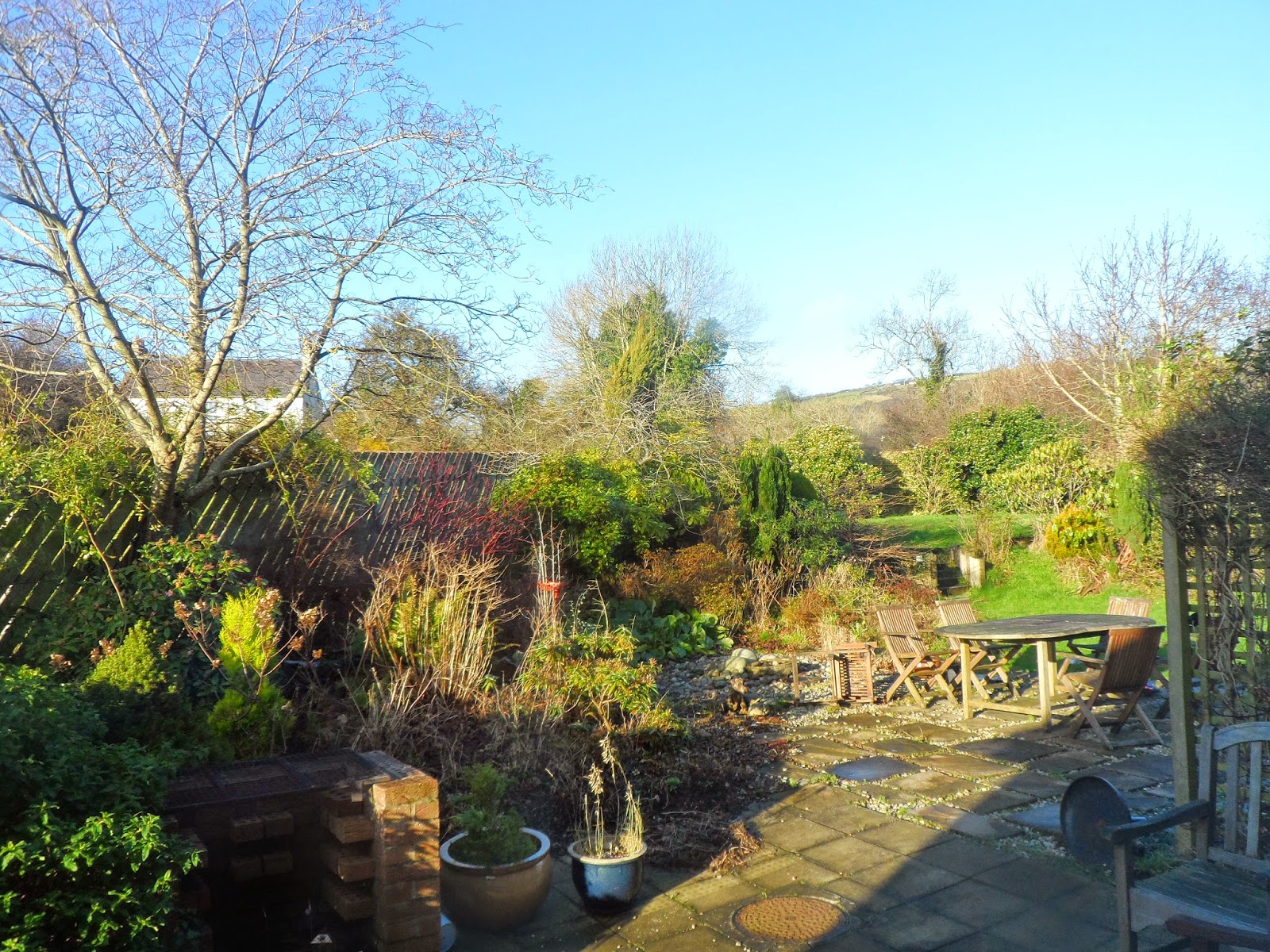 This is this morning's view from the other back door. It made me stop and look for a while. Not just because of the bright bright blue sky. Although Mattman did bring home Tennyson's The Eagle tonight for some lit crit. Ringed with the azure world I stood. I hadn't noticed before that you can see up the inland slope of Knockagh Hill with its farmhouses. When it isn't raining, as it seems to be now in the black night outside.

It was good to stand and look at an immutable hill for a while in winter sunshine. Thinking of this week's Charlie Hebdo and Ang's own bad news. Thinking of help that comes from the hills of Psalm 121.


I will lift up mine eyes unto the hills, from whence cometh my help.
My help cometh from the Lord, which made heaven and earth.
He will not suffer thy foot to be moved: he that keepeth thee will not slumber.
Behold, he that keepeth Israel shall neither slumber nor sleep.
The Lord is thy keeper: the Lord is thy shade upon thy right hand.
The sun shall not smite thee by day, nor the moon by night.
The Lord shall preserve thee from all evil: he shall preserve thy soul.
The Lord shall preserve thy going out and thy coming in from this time forth, and even for evermore.

Prince Charming and I got to the top of Belfast's highest hill over the holidays. Divis Mountain was for the whole Troubles out of bounds and take yourself off at the end of a rifle, and it is a revelation to ramble all over its wide friendly slopes now. The whole beautiful city is spread far below and Belfast Lough sails out towards the rest of you. Be safe on your hills x 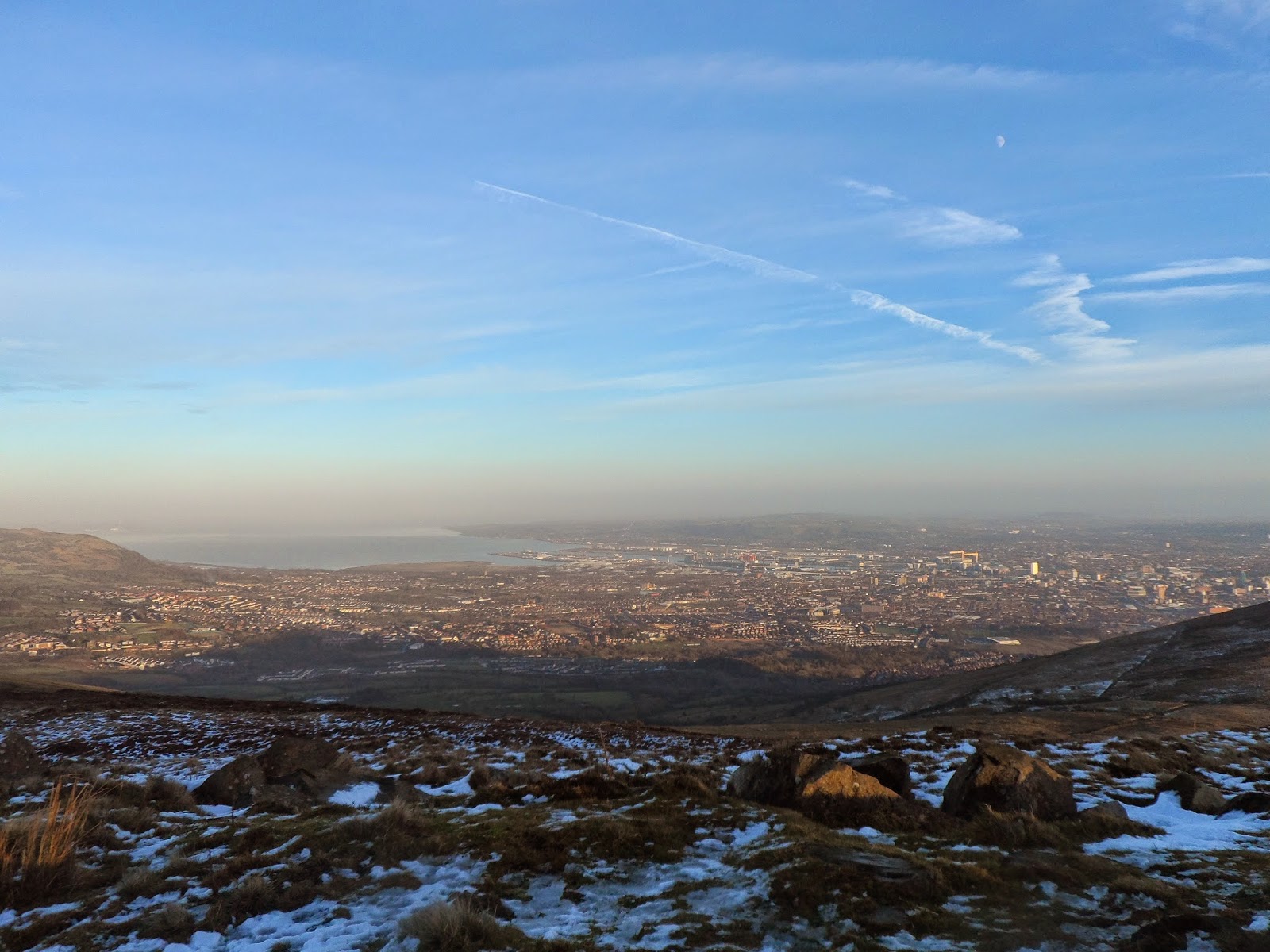