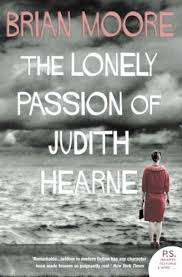 So I finished one of my four books on the go! Might I just say that the A. S. Byatt is marvellous, and I mean that in a literal sense of full of marvel! Glowing rubies of narrative and style. Read it, read it, read it! I have two stories to go, but my favourite so far is A Stone Woman...

Judith Hearne- stone woman? Certainly the Belfast of her era is described as a hard boulder of granite, more bleak and drear than even the constantly wet, constantly patrolled city that I remember. We were up and through the university area on Friday, and you would be hard pressed to imagine a woman in even a red coat tottering along beside a desperate American today.

It is nonetheless, I think,  a very accurate reflection of the city in those austere post-War years. Probably we took a lot longer than other areas to recover, given that our sectarian divides were lined up for war before most battalians got back. Indeed, maybe we're only now seeing the full potential of a recovery from oppression of all sorts.

It's not primarily a book about the city- apparently the Maggie Smith movie is set in Dublin. What interested me most was the question of a crisis of faith. Monsignor Quixote had his dream that unsettled his long held perceptions more than the friendly debate from his friend, the communist ex-mayor. Birdsong chronicles the assault on faith that I think Owen so well encapsulates in The Parable of the Old Man and the Young. Hearne becomes obsessed with the existence of the Host in the altar.

What I wasn't sure about was whether her crisis in faith precipitated her decline into her lonely passion, or whether her rapidly decreasing hope and perspective undermined her faith. Moore paints a cruel background for this woman. I suppose in a way Barbara Pym takes the same subjects: down-at-heel gentility living increasingly sordid lives, although sordid is too strong a fate for the healthy and stoic Pymiennes.

Is there a warning for us all in the fate of Judith Hearne? I think not ultimately. I think it is a call to be grateful for a new era. Especially if you live in Belfast!

You certainly do make me curious...

About Greene, I read lots of reviews that made me think that he isn't right for me right now, but then ! I found a paperback of The Power and the Glory in my own house, so I put it on the nightstand after all. Thanks, Mags!

I've watched some of the movie, but not read the book. Maybe it's time! One of my best friends is from Belfast, though born in 1974, so a different Belfast from Judith Hearne's, I reckon.

Sounds interesting, Mags. What a fascinating land you live in!