fraise's favourite films of the fortnight 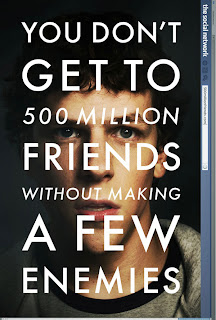 Prince Charming and I actually left strawberries at home (with a responsible adult) last week and went to have our (my) addiction to facebook challenged by The Social Network. Yes indeed! I had been bowled over by Claudia Winkleman's debut on Film 2010, and still had her resounding praise for the script resounding in my head. What a script! I loved the movie. Intelligent, imagery-packed, very challenging time well-spent. I would have to suggest, however, scepticism over closing scene? 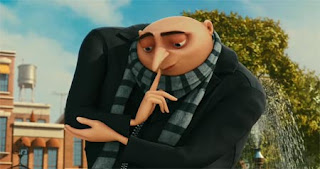 This week obviously called for The Family Holiday Film, and the choice was made by Cooking Catherine who wanted to see Despicable Me 3D "with us". I suppose accompanying a family of small boys is the perfect excuse for a family of very quite nearly totally grown-up boys to be there! Fine choice. I worried that it was slightly subtle for the strawberries but they said that they had liked it all- especially the bit where he loses his trousers. We're very much at the toilet humour stage here! 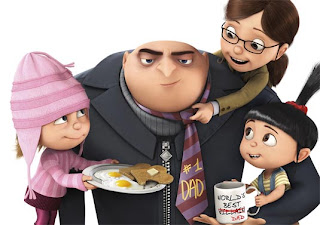 I loved, loved, loved Margo. I want her glasses and her jacket. I did also love Edith's attachment to her hat. I imagine she would feel without it as I do in this trying-to-cut-down-on-facebook stage. Which, in fact, mirrors Mattman's struggle this week to stop sucking his fingers, which in turn necessitates going to sleep without Duckie, but I digress...
I thought one opportunity was lost in the film- Gru should have turned out to be a children's author. I was absolutely convinced that this would be the denouement. Alas no. But it does leave me wondering how many arch villains turn to more constructively creative jobs at times of amoral crisis. Left-handed Housewife- any thoughts?
(This was my now weekly Alphabe-Thursday panic. There being no thought in my head other than surviving half-term and working out what on earth to do about our annual Pumpkin Party being on a busy Sunday...)
Posted by magsmcc at 16:57

You leave me sadly wondering what happened to my former cinema-going self. Please keep inspiring me.

Im an empty nester and enjoy the weekly date nights with the husband. Movies are always a great way to spend time together. We alternate who gets to pick the movie but both agreed...Secretariat was the best film yet. You must go and see it. ~Ames

As a former arch villain myself who has turned to more constructively creative pursuits in aim of a paycheck after the crisis of having children who demand to be fed, I'll let you in on a trade secret: All children's book authors are former arch villains. Who knew?! Yep, even Julie Andrews. She's the worst.

I'm so interested to hear about your fb obsession. I'm a bit overwhelmed by it myself. And all those old boyfriends tracking me down ... what do they want from me, really? What do yours want from you?

Such a cute post. I loved that movie, too. I totally want to go see it again...I need to con my Grands into it! ha!

Thanks for the happy stop on our little journey through Alphabe-Thursday's letter "F".

Thank you for linking.

Aw, don't panic! You F post was Fabulous. I think I want to see Despicable Me now. I was afraid it would be too negative for the kids.

Heh, great F post! I LOVED Dispicable Me. I thought it was a shame they released it so near Toy Story 3 because it sorta got lost in the Toy Story madness and it actually wasn't a bad movie!