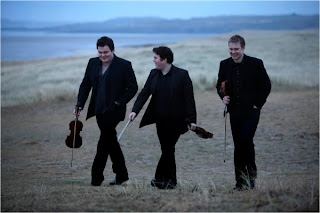 Carrickfergus is fifteen minutes down the road from our little suburb. I drove there a while ago to meet a colleague for coffee. We had coffee. I drove home. On the way HOME I realised with some disgust that I was listening to Jolly Phonics/Veggie Tales/Children's Carols (which we listen to all year round). I switched off the CD player. Only when I got home did it strike me that I must have been listening to Jolly Phonics/Veggie Tales/Children's Carols all the way TO Carrickfergus in the first place.

I mention this to illustrate my complete and utter disinterest in, talent for, knowledge of music.

It was obviously Prince Charming who went to hear Fidil (pleasingly pronounced vigil) last week, but I thought that I could mention them here at fraise lachrymose since we've all been listening to them non-stop ever since. The difference being that this time I don't turn off the CD player!

PC says that if you squeeze through Cleere's bar, you come to a tiny room at the back where they in turn squeeze in as many seats as possible, and then a few more. Which is a shame because if there had been some room he might have been tempted to get up and move!

Aidan O'Donnell has recently won Young Musician of the Year in Ireland, and you can hear them below. My favourite so far is The Hunt of the Hound and the Hare. I love the story, you see! It's like Danse Macabre and Peter and the Wolf. The music's lovely, but I still need a good story!

Oh, what a beautiful sound! I love it!